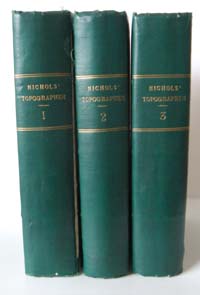 Originally published between 1846 and 1858 and republished here on fully-searchable CD-Rom is the three-volume collection The Topographer and Genealogist. Edited by John Gough Nichols and printed in London by the editor's father, John Bowyer Nichols, in total this monumental collection of historical and genealogical material contains more than 1,800 printed pages. John Gough Nichols was the third generation of renowned London printers, publishers and antiquaries. His grandfather, John Nichols (1745-1826), began life as a printer, but by 1788 was the editor of the Gentleman's Magazine and published in eight volumes (1795-1815) The History and Antiquities of the County of Leicester, the most comprehensive antiquarian survey until that time ever undertaken. Together with Abraham Farley, Nichols proofed and printed the 1783 edition of the Doomsday Book as well as other antiquarian publications. John Gough Nichols' father, John Bowyer Nichols continued the family printing business, while his eldest son, John Gough Nichols is seen as his grandfather's natural successor. John Gough Nichols joined the family printing firm in 1824 and, though his prodigious editorial achievements and biographical studies, may be regarded as the natural successor of his grandfather, John Nichols. He began to attend meetings of the Society of Antiquaries with his father from the age of twelve and, in 1826, assisted John Nichols with his Progresses of James I, completing it alone in 1828. His indefatigable editorship of the Gentleman's Magazine lasted from 1826 to its sale in 1856 but, through his zeal to print original sources and biographical materials, he was also the founding editor of the Collectanea Topographica et Genealogica (1834-1843), the Topographer and Genealogist (1846-1858), the Herald and Genealogist (1863-1874) and the Register and Magazine of Biography (1869) and was also one of the founding members of the Camden Society. o these milestones of biography and local historical publication must be added his Annals and Antiquities of Lacock Abbey in 1834, his contributions to Sir Richard Hoare's History of Modern Wiltshire and his contributions to Archæologia and the publications of the Camden Society, Surtees Society and Shakespeare Society, all of which he had helped to found. When he died, in 1873, his library at Holmwood Park near Dorking in Surrey housed one of the largest collections of topographical and historical books of his time. It was also the home of many thousands of family, business and collected papers that he and his family had been accumulating for over a century. In the course of the next fifty years a succession of sales by Sotheby's began the dispersal of the Nichols archive to its many present locations in public repositories and private collections around the world. As for the three-volume publication, The Topographer and Genealogist, this contains a plethora of material gathered from numerous sources, such as monumental inscription, estates records, parochial records, leases, family chronicles and wills, as well as work undertaken by much earlier genealogists such as the herald, Peter Le Neve as well as records from various shires and hundreds of England and Ireland. It was Nichols' express wish that The Topographer and Genealogist should be a forum for the publication of detached essays on topography and genealogy bringing to the public attention hitherto lost relics while at the same time preserving these for posterity and in this Nichols was surely successful.