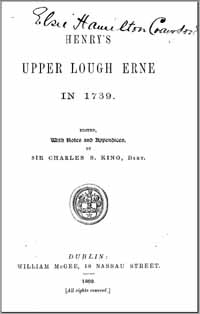 The Reverend William Henry's Upper Lough Erne was compiled by him in 1739 and until its publication in 1892 by William and McGee of Dublin, existed only in manuscript, which at that time was held at the British Museum amongst a collection of manuscripts relating to the Royal Society. As to the author: the Reverend William Henry was a Fellow of the Royal Society, who had graduated B.A., B.D., and D.D., from Trinity College, Dublin, before becoming Rectory of Killesher and Urney in 1761 and later Dean of Killoe. Rev. Henry died in Dublin in 1768. Edited by Sir Charles King, Bart., the published manuscript of Henry's description of Lough Erne is, as the editor notes, imperfect missing at it is a description of the Lower Lough. However, inserted into the manuscript in its place and apparently by the same author are fragments of topographical noted for County Donegal. Of great interest because of the early date of its compilation, Henry describes the purpose of the manuscript on the first folio page, namely to take a journey along the entire length of the Upper Lough from its source to the ocean making descriptions of the principal geographical features and gentlemen's seats as he went. This he did admirably and within the first three pages of the manuscript Henry encounters and records his observations of the Ballyhaise River, Rathkenny House and Farnham, which was described a century later as 'one of the noblest ornaments in the County'. As interesting as the original manuscript is, much of the credit and at least as much of the interest that can be derived from its publication must go to its editor Sir Charles King. At every opportunity in a plethora of footnoted, King provides detailed genealogies and biographical notices on all of the families mentioned by Henry. Containing 95 printed pages with an alphabetical index, King's published edition also contains contains a number of useful appendices compiled by the editor. These include a description of Enniskillen in 1611, together with a list of the burgesses and provosts of the town the following year. The names of the townsmen of Enniskillen together with their arms dating from the 1630s as well as lists of officers of various Fermanagh Regiments at the time of their dissolution, together with annual pay received by the officers. These include William Wolsely's Regiment of Horse, Abraham Creighton's Regiment of Foot and Brigadier Tiffin's Regiment all dissolved in 1698. The appendices also include contemporary accounts of the Great Fire of Enniskillen in 1705 and a list of Crown Tenants in Fermanagh from 1678. Republished here in fully-searchable digital format, Sir Charle King's edited and published version of William Henry's Upper Lough Erne is essential for anyone interested in County Fermanagh, Lough Erne and descriptions of these and its notable inhabitants in the early 18th century.