J. Bulmer, History, Topography and Directory of Lancaster and District, 1913 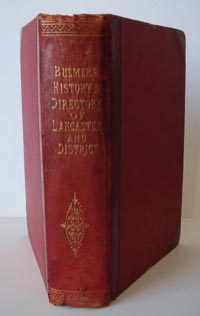 One of only two directories for Lancaster and District published by Bulmer's, this edition contains some 608 printed pages and is subtitled The History and Archaeology of the Town of Lancaster, with Separate Historical Descriptions of Each Parish and Township within a Radius of about Sixteen Miles. Beginning with a history of the Lancaster from the Roman Invasion and continuing with a historical and topographical description of the town of Lancaster in 1912, the Directory then provides details on the towns civic, religious and municipal institutions and officers beginning with the Corporation of Lancaster its Council and Councillors and ending with a list of the carriers to and from Lancaster. The Directory then provides an alphabetical list of of the main residents and traders of the town followed by an alphabetical classification of trades and professions. The majority of Bulmer's Lancaster Directory, some four hundred pages, treats on the parishes and townships within sixteen miles of the town, providing for each historical and topographical descriptions as well as listings of the chief residents, services, statistics, etc. The parish or township of Over Wyresdale, is treated upon in eighteen pages. Formerly part of the ancient forest of Lancaster it then existed in the Lancaster country court district and the union, petty sessional and electoral division of South Lonsdale. With a long association with the Molyneux family, the largest landowner for the parish was the Molyneux successor, the Earl of Sefton. Lengthy descriptions are provided for the notable edifices of Over Wyresdale, notably the Friend's Meeting House, Cawthorne's Endowed School, Abbeystead House, Lentworth Hall and Catshaw Farm, before a full-page biographical note on the Molyneux family is provided. The Directory then provides alphabetical notices of the principal residents and farmers of the villages within the parish, which included Aldcliffe, Cockersand Abbey, Ashton-with-Stodday, Bleasdale, Gressingham-with-Eskrigg, Heaton-with-Oxcliffe, Middleton, Myerscough, Overton, Preesall-with-Hackensall, Quernmore, Stalmine-with-Staynal, Thurnham and Over Wyresdale. While the level of detail provided by Bulmer's Lancaster Directory on the parish of Over Clydesdale and its villages is the norm throughout, entries for some of the larger urban settlements such as Morecambe, Carnforth and Cartmel carry much greater detail and include trades and professions directories as well as the usual list of principal inhabitants. As Bulmer's Lancaster Directory is restricted to a relatively small geographical area the amount of detail provided on the places and people it does treat on is necessarily that much greater than a complete country directory. As with all historical directories the uses for the local historian and genealogist alike are almost limitless and this is undoubtedly the case with Bulmer's History, Topography, and Directory of Lancaster & District, one of only a handful of directories that cover this part of Britain.