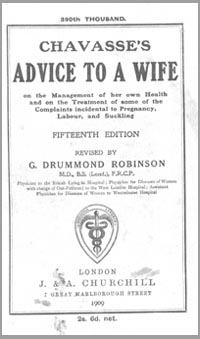 Republished here on fully-searchable CD-Rom is the 15th edition of Pye Henry Chavasse's "Advice to a Wife on the Management of here own Health and on the Treatment of some of the Complaints Incidental to Pregnancy, Labour and Suckling", which was issued in 1909. This edition contains some 405 printed pages and was issued as a revised edition, which included revisions and a preface by G. Drummond Robinson, M.D., B.S., F.A.C.P, physician to the British Lying-in Hospital. The success of Chavasse's original 1876 publication is witnessed by the fact that this was the 15th edition of his work, which boasted of sales of more than 390,000 copies, which eclipsed the sale of another of Chavasse's publications, Advice to a Mother, which had by 1909 sold in excess of 310,000 copies. Prior to the appearance of self-help books, such as those by the now infamous 'Dr. Spock', Chavasse's advice to mothers and wives had little competition in the market place and although the advice from the former Fellow of the Royal College of Surgeons held true for its time, Chavasse had died by 1878, when his self-help books had already entered into their 5th editions and some of the advice being offered was truly out of date. This being the case the books were revised for a 'modern' female audience at the start of the twentieth-century. G. Drummond Robinson's revised edition of Chavasse's Advice to a Wife holds much of the Victorian values and discipline expressed in the first edition and it is probably that only the medicine of midwifery had been added to. This being the case, the introductory chapter to Chavasse's Advice to a Wife, containing some quarter of t he entire book, is given over to advice to a wife wishing to conceive a child, which is detailed in some thirty subsections, ranging from 'Opium habits', to the 'Lacing of Boots' and the necessary ventilation for a woman inside and outside of the home. The chapters that follow detail the menstrual cycle in various ages of women up to the point of conception and includes sections on 'hysteria', the 'whites' and the 'change of life'. Chavasse's advice once a child had been conceived begins with advice on how to tell if one has actually become pregnant, false pregnancy, morning sickness, had how to tell whether the child will be a boy or a girl to how to predict the due date of the child. These chapters are followed by those on the labour and birth of the child through to the suckling and weaning of the baby, which we are told should be no less and no more than nine months in duration at regular intervals of exactly two hours for the first two months, extending to four-hourly feeds right through to the duration of nine months. Needless to say Chavasse's Advice to a Wife is hopelessly out of date and apart from some of the medical advice offered which still holds true it has little to offer to the reader apart from idle historical curiosity. Chavasse, at the time of writing, was appealing to the wives of the Victorian middle classes whose lives bore little resemblance to the vast majority of women in Britain. Having said this, to have sold nearly 400,000 copies in 15 editions highlights the contemporary relevance and appeal of Chavasse's work.