Kelly's Directory of the Country of Norfolk, 1933 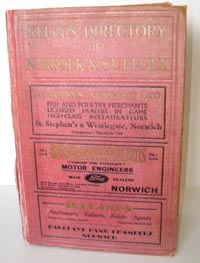 Republished here on full-searchable CD-Rom is Kelly's Directory of Norfolk, which was published in 1933. Containing some 970 printed pages, Kelly's Directory, as the then editor correctly noted, was primarily a directory, but also served as the gazetteer for every county for which Kelly's Directory was published, and this Norfolk edition is no exception. This directory, published with a revised large fold-out map, includes every parish and many of the postal villages in the county and provides a thorough topographical description of every town, parish, village and township, describing the principal buildings and geographical objects of interest in each. Great care is also taken in Kelly's treatment of the ecclesiastical divisions of the county with descriptions of all the churches, cathedrals the value of the livings, parochial incumbents and patrons. The same level of detail is provided for the civil and local administration of the county with full information on county courts, districts fairs, markets, county hunts as well as communications such as rail and post throughout the county. Beginning with Acle and ending with Yelverton, for those who might be unfamiliar with a directory such as Kelly's the degree of information contained on each village can be gleaned from the description of just one of the places entered in the Towns and Villages section of the directory. The small hamlet of Frenze was described as being situated on the River of the same name, a branch of the Waveney, one mile north-east from Diss station on the London and North-Eastern railway. Situated in the Southern Division of the County, in the Diss Hundred and Petty Sessional and county Courts Districts of Diss, Frenze was also situated in the Depwade Rural District, Rural Deanery of Redenhall, Archdeaconry of Norwich and Diocese of Norwich. Frenze was formerly a parish, but by 1933 was united with Scole. An ancient church dedicated to St. Andrew was in rubble, but still contained the knave and bell and dedications to the Blennerhassett family dating from 1475. The Church was restored in 1900 and afforded 70 sittings. Parochial records for the church date from 1554. The living is a rectory with an annual value of £398 alternately the gift of Sir Edward Mann, Lord of the Manor and the Crown. The only building of note that stood here was Frenze Hall. Situated on the river the Hall was by 1933 demolished and replaced by farm buildings. The soil of Frenze was chiefly clay and gravel and the principal crops grown were wheat, barley and some pasture. Population at the time of the enumeration of the 1921 Census was a mere 46. The entry for Frenze is concluded by a list of the principal private residents and business in the parish,which number only four in total. While Frenze was a very small hamlet within the county of Norfolk as a whole, the level of detail recorded here is typical throughout the directory and details for the the residents of the principal towns and cities of the county, such as Norwich, King's Lynn, and Yarmouth are much more extensive. This edition of Kelly's Directory of Norfolk is prefaced by a topographical and geological description of the county and is concluded with an extensive alphabetical list of the county's chief residents and commercial interests, which could be found across the length and breadth of the county in 1933. In addition to these expected but key features of any useful directory this edition also includes some many pages of full and half-page advertisements, many containing useful sketches and photographs from the period. For anyone with even the slightest interest in the residents, topography of descriptions of the county of Norfolk this fully-searchable 1933 edition of Kelly's Directory of Norfolk is not to be missed.

The Placenames of Middlesex, 1922