Adam and Charles Black, Guide to the County of York, 1888 13th Edition 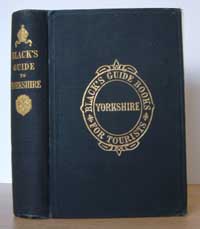 First published in the 1850s and republished here on fully-searchable CD-Rom is the 13th edition of Adam & Charles Black's Guide to the County of York, which was published in Edinburgh in 1888. Greatly enlarged from the original publication, this edition contains some 570 printed pages, which include many etchings, large-scale maps, plans and diagrams as well as 135 pages of contemporary advertisements, predominantly hotels throughout Britain, Ireland and continental Europe, which many readers no doubt will find fascinating. One of the best known British publishing houses, Adam and Charles Black or A & C Black was founded in Edinburgh in 1807 when Adam Black borrowed £200 from a friend. One of the first acquisitions made by A & C Black was the purchases the rights to Encyclopaedia Britannica in 1827 for just under £7,000 and in 1851 they acquired the copyright to Walter Scott's Waverley novels. Perhaps best known as the publishers of Who's Who and Black's Medical Directory, Black's Guide Books dedicated to 'The Tourists' were published for many counties of England as well as Ireland, Scotland and Wales. Adam & Charles Black still exists and is part of the Bloomsbury Publishing House group. Black's Guide to the County of York is introduced with a number of tours throughout the county that the tourist could undertake mostly by the means of the extensive rail network that by the 1880s traversed across the length and breadth of the county. These tours included excursions, walks and things to see and do en route. This introduction is followed by a general historical and geographical description of the county much of which is made-up of brief biographical sketches of eminent Yorkshire men. After these preambles the Guide to the County of York begins in earnest with a description of the City of York, which includes a large fold-out street plan of the city, historical notes on the development of the city, the main sights of interest as well as etchings of the windows of York Minster and other notable churches and edifices in the city. Although beginning with the City of York the remainder of Black's Guide to the County of York is arranged alphabetically by descriptions of the principal towns in the county. Beginning with Airedale and ending with Whitby, the Guide provides detailed descriptions of each of the principal towns, how to get there, where to stay and what to see within a radius of about three-miles walking distance. Boston Spa for example was reached by alighting at Thorpe Arch Station and the traveller was directed to the local hostelries of the Royal Crown, Fox and Hounds and the Admiral Hawke. The village, originally known as Thorpe Arch acquired its name from followers of William the Conqueror who acquired estates in the vicinity. The Spa from which the village took its name was discovered in 1744. The village consisted of one long street of well-built houses and was recommended as a resort for those who were desirous of quietness and repose away from other more crowded and fashionable watering places. Within the vicinity of Boston Spa the tourist was directed to to Bramham by coach and from here to Bardsey. In between the tourist could visit Bramham Park, Bramham Moor, Haslewood, before if properly planned reaching Harewood. Black's county guides are amongst the most superior of their kind to have been published and this edition must appeal to anyone wishing to experience Yorkshire as it was in the 1880s.