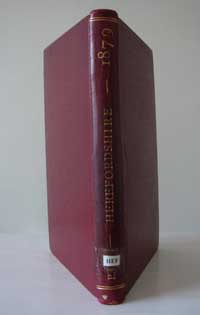 Republished here on full-searchable CD-Rom is the 1879 edition of Kelly's Post Office Directory of Herefordshire. Containing nearly 320 printed pages, which includes a map of the county, as with most other directories published by Kelly's, this 1879 Herefordshire edition, although primarily a directory, also serves as a gazetteer. Originally issued as part of a joint publication with several other counties, with population of just over 125,000 at the time of the enumeration of the 1871 Census of Population, this is one of the earliest editions of Kelly's Directory of Herefordshire for one of Britain's smallest counties. The Herefordshire Post Office Directory details every village, town and city in the county providing thorough topographical and statistical descriptions of all of the religious, educational, civil and municipal institutions contained in each. In most instances the directory also provides a brief historical account of the village or town under consideration, which often includes important events and personages connected with the locality. Beginning with the parish of Abbey Dore and ending with the parish of Yazor, the bulk of Kelly's Post Office Directory of Herefordshire for 1879 is taken-up by the alphabetical entries for the cities, towns and villages of the county. For any reader who might be unfamiliar with a directory and gazetteer such as Kelly's the degree of information contained on each village can be gleaned from the description of one of the entries, that of Peterstow. A parish and village, Peterstow was recorded as being situated within the lower division of Wormelow Hundred, Ross Union, county court district of Harewood's End, the petty sessional division and rural deanery of Archenfield and the Archdeaconry and Diocese of Hereford and lies on the old road from Hereford to Ross and was known by the Welsh name of Lampeter. The parish Church of St. Peter's was of ancient origin and was erected on its present site during the reign of King Harold in about 1065-6 and portions of this church still survived in the present building. A plain building in excellent repair, St. Peter's consisted of a chancel, nave, tower and spire containing four bells and a porch. The parochial records for the church survive from 1538. The living was a rectory valued at some £390 a year and the rector was given as the Rev. John Jebb, D.D., of Trinity College, Dublin. Also situated in the parish was a chapel for Wesleyans. The Lords of the Manor of Peterstow were recorded as the Governor's of Guy's Hospital. The parish contained 1,544 acres with a rateable valuation of £3,393. The soil was mostly red loam with a subsoil of clay and rock. The chief crops of the parish were wheat, turnips and barley. The population of the parish in 1871 was given as 356, most of who resided in the village. This contained a national school for girls and boys, a number of shops and two public houses, the Yew Tree and the Red Lion Inn. While this is the typical level of detail the reader might expect to find, the larger towns and cities in the county, for example Leominster and Herefordshire itself, are afforded a much greater level of detail, with the entry for the town of Hereford extending to more than 20 pages. The alphabetical list of villages and towns is followed by a county-wide alphabetical listing of Herefordshire's principal Private Residents, as well as a Trades and Professional Directory for the County and is concluded with more than 100 pages of county advertisements may of which are accompanied by sketches and pictures. For anyone with even the slightest interest in the residents, topographic descriptions and commercial interests present in Herefordshire this fully-searchable 1879 edition of Kelly's Post Office Directory of Herefordshire is highly recommended.