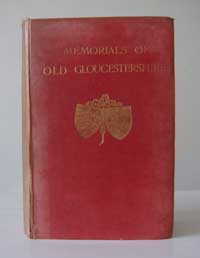 First published in London in 1911 and republished here on fully-searchable CD-Rom is the second edition of Memorials of Old Gloucestershire issued in 1912. Fully-indexed and containing some 385 printed pages, Memorials of Old Gloucestershire is edited by Peter Hampson Ditchfield the prolific author of many authoritative publications on rural England. This edition of Memorials of Old Gloucestershire contains well over 100 illustrations, many of which are pen-and-ink sketches by W Leighton and Christopher Hughes. Published as part of a series of county histories, by 1906 twelve such publications had been completed or were in the latter stages of preparation. Many of the contributors to the lengthy articles and essays in the Memorials series were eminent historians, archaeologists, architects and amateur enthusiasts and the Gloucestershire edition was no exception. The editor, Peter Hampson Ditchfield was a Fellow of the Royal Society of Antiquaries, the Royal Society of Literature as well as the Royal Society of History and by 1911 had become the general editor of the Memorials series. Numbered amongst the other contributors to Memorials of Old Gloucestershire were Fellows of the Society of Antiquaries, Fellows of the Royal Institute of British Architects as well as well as the honorary secretary of the Bristol and Gloucester Archaeological Society, the Reverend Canon Bazeley, M.A. The Memorials of Old Gloucestershire contains sixteen extremely well-written, researched and illustrated articles ranging in their scope from Norman Doorways in County Gloucestershire, Berkeley, Ancient Forests in the county and the Bristol Riots to name but a few. In his general introduction to historic Gloucestershire Ditchfield rightly points out that there was a general clamour by residents within each of the counties covered by the Memorials series to own a well-illustrated publication that brought together the results of the most recent research into the archaeology and history of their county and it was hoped that the Gloucestershire edition presented a thorough account of the shire's chief items of interest. Apart from monographs on the county's two cities, there are articles on Berkeley, Winchcombe and Sudeley Castles, the various church bells that and fonts that could be found throughout the county as well as a fascinating account of the ancient forests of the county, their descriptions and uses, from sources such as the Domesday Survey and ecclesiastical documents. The most lengthy essay concerns the the Norman doorways of Gloucestershire. The county of Gloucester was redolent with hundreds of examples of Norman craftsmanship and this article treats comprehensively with just one facet of Norman architecture, that of stone doorways. Illustrated with with over 50 sketches and photographs, the author of this essay, Charles Keyser, M.A., F.S.A., concludes by noting that even in some of the more humble churches of the county, beautiful examples of the skill of 12th century Norman masons could still be witnessed. Other articles featured in Memorials of Old Gloucestershire include the Fairfield Windows; the Misericords of Bristol Cathedral; Thomas Chatterton; Chipping Campden and its Craftsmanship; Bristol and its Historians and the Roll of Gloucestershire Worthies. Many of the articles are illustrated with photographs and sketches and the original publication is fully-indexed. Memorials of Old Gloucestershire presents a fascinating miscellany of articles on the extremely diverse and fascinating county.

Lancashire and Cheshire Wills and Inventories 1477-1807 (The Chetham Society, 3 vols)