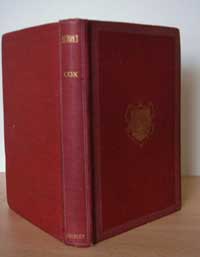 First published in London by Methuen in 1903 and republished here on full-searchable CD-Rom is the second edition of John Charles Cox's Surrey. Containing more than 200 printed pages, with many sketches and photographs by Edmund New, Surrey recalls the history and descriptions of what was still very much a rural county before the out break of WWI, from a historian who had spent much of his life fighting for the political rights of the rural labouring poor. The Rev. Dr. John Charles Cox (ca. 1844-1919) was a renowned historian of English rural life and is now best-remembered as a topographer, antiquarian, local historian and publisher of church records. A Fellow of the Society of Antiquaries, Cox was editor of the Reliquary and Illustrated Archaeologist. In his seminal work, How to the Write the History of a Parish, published in 1905, Cox frequently emphasises the need to give the poor of the parish a voice and this need witnessed his prolific collection and publication of parish records, notably vestry minutes, where the poor of the parishes under his gaze often found a voice. Published towards the end of his career, Cox's concerns over a rapidly changing and industrialising rural landscape and the negative impact these changes had on the rural labouring classes find their way into Surrey, which is essentially a topographical dictionary of the county. Cox believed that Surrey was probably the most beautiful of the home counties, with its still-exceptional ancient market towns, buildings, churches, manor-houses and cottages. However, he believed that outside of the county these superb attractions were little known and in order to make these more widely recognised and to provide means of access to their delights it was decided to publish Surrey in the mode of a 'gazetteer'. Surrey begins with a general introduction providing statistical details on the county, its population, area and divisions, before embarking on descriptions of the county's flora and fauna, history, industries, antiquities and ecclesiology. The majority of Surrey is given over to an alphabetical descriptive dictionary of notable places in the county. Beginning with Abinger and ending with York Town and Camberley Cox's concerns over a rapidly changing landscape find voice in the pages of Surrey. Of Dulwich, he can still say that 'this is a beautiful urban hamlet'. Detailing the foundation of the famous college, an adjacent picture gallery and the creation of Dulwich Park in 1890 and only the mere hint of Dulwich's rapid growth and absorption into Greater London is given towards the the entry. All-in-all Surrey is a most satisfactory publication. Replete with contemporary photographs and etchings of a county that has now changes out of all recognition, Cox's sympathetic descriptions of places and people and New's illustrations and photographs make this a highly recommended publication for the county.