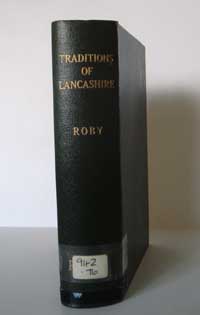 Published in London and New York in 1928 by Frederick Warne & Co. Ltd., and republished here on fully-searchable CD-Rom is the third edition of the first series of John Roby's Traditions of Lancashire. Originally published in 1829, different versions of The Traditions of Lancashire were published in 1906, 1911, 1928 and 1930. This edition, marking the centenary since the Traditions was first published, contains the author's original preface as well as a lengthy biographical sketch of the author. Born on Wigan in 1793, John Roby began his career as a banker in Rochdale, but by the early 1820s was consumed by his passion for collecting stories. This led to his publication of the first series of The Traditions of Lancashire, which proved to be extremely influential and a huge hut with the British upper classes. Due to the book's popularity it was quickly followed in 1831 with the publication of a second series of Traditions. The popularity and success of the publications led many at the time to question whether or not Roby could have been the real author of the works and some put forward Thomas Crofton Croker as the real authority. Roby's efforts in The Traditions of Lancashire presaged later work in 'folkloristics' and commonly used the term oral tradition before this came into common academic usage. Calling himself a collector of oral traditions rather than a folklorist or antiquarian, Roby's The Traditions of Lancashire sides with the beliefs of the so-called 'Romaticists', which would lead his corpus of work to come under a large degree of criticism after his death. Roby's view of folklore as a whole was one of faulty utterances of lowly peasants. This led him to weave irreconcilable stories into a coherent whole and rewrite these stories in a more refined style that proved to be acceptable and popular with an upper class readership. Although folklorist continued to use and refer to The Traditions of Lancashire until the 1870s when new works on the legends of Lancashire superseded it. Folklorist, William Axon, writing in 1899, stated that although Roby was a diligent collector of local legends and oral traditions, his main object was purely literary, and for serious folklorists his works had to be approached with a huge amount of caution. Nevertheless, it was acknowledged that Roby's works contained important folklore material whether the author decided to call it this or not. Containing some 586 printed pages Axon's views of Roby's work are somewhat borne out in The Traditions of Lancashire. With chapters such as Mab's Cross, The Grey Man and the Phantom voice clearly being literary representations of the oral traditions collected by Roby. Others, such as the Siege of Lathom being so clear in popular Lancashire memory and of such recent origin that these could hardly be given the credit of being oral traditions at all. Nevertheless, despite the later criticism afforded to The Traditions of Lancashire, Roby's works did and still have a huge popularity and for this reason alone this publication can be readily recommended.