Doheny's, The Felon's Track or History of the Attempted Outbreak in Ireland (1843-1848) 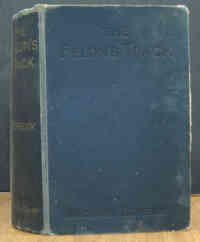 This edition of the Felon's Track, the most notable achievement by the lawyer, writer and erstwhile Irish revolutionary, Michael Doheny, was published in Dublin in 1916 and includes an account of the abortive rebellion in Ireland in 1848 by another of its participants, Thomas D'Arcy Magee. Subtitled "History of the Attempted Outbreak in Ireland, Embracing the Leading Events in the Irish Struggle from the year 1843 to the Close of 1848", the Felon's Track recalls Donheny's part in the events that led up to the abortive Rebellion in Ireland in 1848 and his escape to America, where he wrote and published his account in 1849. Doheny was born at Brookhill near Fethard, Co. Tipperary in 1805, the third son a farmer, Michael. By a series of fortunate events and intelligence, Doheny found himself in Dublin at the start of 1843 and the beginning of Daniel O'Connell's second great campaign: Repeal of the Act of Union. It is at this point that Doheny begins his narrative in the Felon's Track. Although not ranked as one of the shining stars of the Young Ireland Movement, such as Thomas Davis, John Mitchel, Charles Gavan Duffy and the like, Doheny was numbered amongst their intimate circle and as such his account of the events that led up to 1848 have as much import as, for example, John Mitchel's Jail Journal. The Felon's Track records Doheny's involvement in the Young Ireland Movement and his eventual disillusionment with O'Connell's political campaign for Repeal of the Act of Union, which led him and others to break away from O'Connellite politics. Doheny became one of the founders of the Irish Confederacy, which by the end of 1847 had moved to the believe that Ireland would have to take its freedom from Britain rather than wait to be granted this right. The Felon's Track eloquently recalls Doheny and his colleague's excitement during the revolutionary year of 1848 as well as his reticence at taking up arms in Ireland. Perhaps the most compelling passages of the Felon's Track detail Doheny's escape from the authorities after the siege at Ballingarry and his period on the run with James Stephens. Neither Stephens nor Doheny were captured and Doheny arrived in the United States at the beginning of 1849 and immediately began setting down his narrative that was published as the Felon's Track in the same year. In addition to a the personal narrative provided by Michael Doheny in the Felon's Track, the biographical account of the events leading up to the rising of 1848 includes a number of interesting appendices, one of which is entitled 'descriptions of persons charges with treasonable practices', and is biographical sketches on all of the leading personalities involved in 1848. The Felon's Track is fully-indexed and includes numerous portraits of the 1848 Revolutionaries. Republished here in fully-searchable digital format, the Felon's Track provides a vivid account of one episode on Ireland's struggle for freedom and is a must for anyone interested in Irish history.