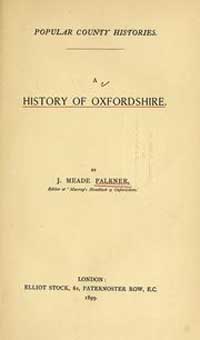 First published in London in 1899 by Eliot Stock as part of the 'Popular County Histories' Series, and republished here on fully-searchable CD-Rom, is J. Meade Falkner's A History of Oxfordshire. Containing some 336 pages, Falkner's history of the county is, in his own words essentially a sketch history of the county, which unavoidably treats to a large extent on the university and as a book that was intended for a popular audience authorities are kept to a bare minimum. Nevertheless, A History of Oxfordshire is well-written and thoroughly absorbing account of the county from its pre-Roman origins down to the end of the eighteenth century. John Meade Falkner (1858-1932) was educated at Marlborough College before gaining a history degree from Hertford College, Oxford. He was the private tutor to the children of Sir Andrew Noble who ran Armstrong Whitworth Co., then one of the largest arms manufacturers in the world. Falkner was to succeed Sir Andrew as chairman of the company and presided over the company during WWI. Famous as a novelist and poet, Falkner is best-known for his 1898 novel, Moonfleet, as well as poetry, Falkner was also an avid collector of antiquities, which he collected from all over the world. Amongst Falkner's non-fiction works were a Handbook for Travellers in Oxfordshire (1894). A Handbook for Berkshire (1902), Bath in History and Social Tradition (1918) as well as A History of Oxfordshire (1899). Beginning with a description of the topography and indigenous peoples of Oxfordshire before the arrival of the Romans A History of Oxfordshire then portrays the consecutive occupations of the county by the invading Romans, the Saxons and the Danes before the arrival of the Norman conquerors when the boundaries of modern Oxfordshire were drawn-up and consolidated. There follows chapters roughly covering the reigns of Henry I, Stephen, Henry II, Richard I, John and Henry II, before protracted treatise on the the University of Oxford. Starting with the early beginnings of the University during the reign of Henry I and the monastic Oxford schools there are successive chapters on two of the founding fathers of the University, Wykeham and Wyclif. As well as chapters on the University on the fourteenth century and medieval periods. From this point onward Falkner provides a more balanced account of the history of the county during the reigns of Henry VIII and the dissolution of the religious houses in the county, Elizabeth I and Mary before the turbulent years of the Stuarts and the pivotal part played by the county of Oxfordshire during the periods of the Civil War, the Commonwealth and the Restoration. Although sold as a 'popular' history, A History of Oxfordshire is much more than a mere primer. Given the learned background of its author, coupled with his skill as a writer of fiction and poetry, A History of Oxfordshire presents one of those happy mediums, a thoroughly readable and entertaining history book.