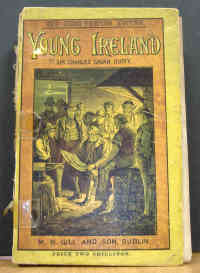 First published in 1880, this, the 'People's Edition' of Young Ireland: A Fragment of Irish History, 1840-1845 was published in Dublin in 1884. Written in Australia by Sir Charles Gavan Duffy, A Fragment of Irish History was Duffy's first, and even though he apologised for its length, by far his shortest attempt to record the political events of the period 1840 to 1845 in which he was a prominent player and main apologist and followed-up this publication with Four Years of Irish History, 1845-1849 and his monumental autobiography: My Life in Two Hemispheres. Born in Monaghan, Duffy was educated in Belfast and was like many of his political associates, a qualified barrister; but it is as a journalist and co-founder of The Nation with Thomas Davis and John Blake Dillon that Duffy is best-remembered in Ireland. Founded in 1842, The Nation was the mouth-piece of the Young Ireland Movement to which Duffy pays tribute in a Fragment of Ireland History. Duffy's account of this monumental period in Irish history, which Patrick Pearse looked-upon as the dawn of Irish freedom and Douglas Hyde and even W. B. Yeats as the rebirth of Irish culture and nationality, opens with the central character and theme of this book: Daniel O'Connell and the Repeal of the Act of Union; while it is true that Duffy could best be described as as a constitutional nationalist at the time of writing he has been Premier of Victoria, Australia, his Fragment of Irish History is a homage to friends past and present, such as Thomas Davis, who had become alienated from O'Connellite Politics. Indeed, it was O'Connell who dubbed Duffy, Davis and others as 'Young Ireland' preferring to associate and label himself as 'Old Ireland'. In just over 300 pages A Fragment of Irish History records O'Connell's attempt and eventual failure to Repeal the Act of Union and ends with the death of Duffy's closest friend and political ally, Thomas Davis. However, A Fragment of Irish History ends before political strife between Young and Old Ireland broke-out into open hostility leading to the belief amongst some, including the likes of John Mitchell and William Smith O'Brien, that only through physical violence could Ireland take its freedom, a right that would never be granted willingly by the British Parliament. In this sense, A Fragment of Irish History is a prelude to Duffy's later publications, which considering the abject failure of their cause and the personal antagonisms that later developed amongst the surviving members of the Young Ireland Movement, he found it more difficult to portray subjectively. For those interested in the politics of Irish History, especially that of the mid-nineteenth century, there are few better starting points that Charles Gavan Duffy's A Fragment of Irish History, written not only by an observer, but by an active and intelligent participant in all the events he recounts. Republished here in fully-searchable digital format, the People's Edition of A Fragment of Irish History is a must for anyone interested in Irish History.