Arthur J. Jewers (Ed.), Heraldic Church Notes from Cornwall, containing all the Heraldry and Genealogical Particulars on every Memorial in Ten Churches in the Deanery of East, with Copious extraxts from the Parish Registers. 1887 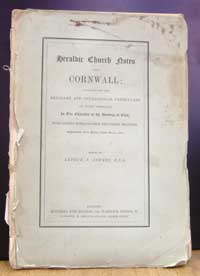 First published in London by Mitchell & Hughes in about 1887 and republished here on fully-searchable CD-Rom is Arthur John Jewers' Heraldic Church Notes from Cornwall. Containing 251 printed pages, this republication carries the the full title: Heraldic Church Notes from Cornwall: Containing all the Heraldry and Genealogical Particulars on Every Memorial in Ten Churches of East, with Copious Extracts from the Parish Registers, Annotated with Notes from Wills, Etc., and the original was fully-indexed by Jewers' son. Jewers, a fellow of the Society of Antiquaries, was editor of the Journal of the Ex Libris Society and the Harlian Society and contributor to numerous publication son heraldry and genealogy, especially relating to the west country of England. The most important of these works included early monumental inscriptions and heraldry from Wells Cathedral and the history and heraldry of famous sons of the west country, numbered amongst who are Sir Francis Drake. From the starting point of the ten churches mural monuments and floor slabs, Jewers has attempted to trace the memorialised families using the extant parochial records, wills and administrations records, herald's visitations and other sources from the dates of their deaths to the present day. The ten churches for which Jewers inspected the mural monuments and floor slabs were Rame, St. Johns, Sheviock, Saltash, East Antony, St. Germans, St. Stephens, Botus Fleming, St. Dominick and Maker. Each of the ten churches visited by Jewers is fully described, chiefly by the date of its consecration, and its geographical location and then the first monument that Jewers happened upon as he enters the church in question. In the instance of St. Dominick, Jewers was immediately confronted by a canopied altar tomb with the recumbent effigies of two gentleman. These, the reader is told, are for Sir Anthony Rous and Ambrose Rous Esquire, his son. Jewers provides the armorial bearings for the Rous family, and from the period of Sir Anthony's first marriage, the pedigree of the Rous family are studiously followed by means of the family's entry into the Herald's Visitation to the parish providing a pedigree from the early seventeenth-century, wills, administrations of estates, the parish registers for St. Dominick's, as well as monumental inscriptions from other churches. This process is pursued by Jewers for other families memorialised in the the church of St. Dominick, such as the Brendon family, who can be traced through the church's records back to the mid-sixteenth-century, the Clarke family of Halton and several others besides. For the churches covered in Jewers Heraldic Sketches of Cornwall and for the families that have been memorialised within the churches in question, this is an excellent publication full of genealogical and historical interest, not least because many of the monuments detailed by Jewers were already in a state of considerable decay, a condition that cannot have improved since his visit in the late 1880s.