Captain Charles Johnson, The Lives and Actions of the Most Noted Highwaymen, Street-Robbers, Pirates &c. &c. 1839 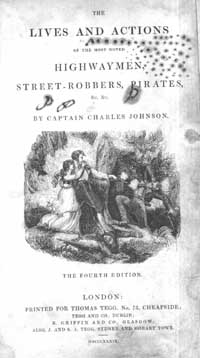 Republished here on fully-searchable CD-Rom is the immensely popular and hugely successful Johnson's Lives of Highwaymen and Pirates. First published in 1724 As a General History of the Robberies and Murders of the Most Notorious Pyrates and often abbreviated to A General History, the work had been republished and reissued many hundreds of times, down to the present day. This edition is known as the Dublin Tegg 'fourth edition' published in Dublin in 1839. This was the thirty-fifth time that the book had been published and this edition was based on 1813 Edinburgh release and carried the full title: The Lives and Actions of the Most Noted Highwaymen, Street-Robbers, Pirates, Etc. The identity of the author, Captain Charles Johnson, and his authorship of Highwaymen & Pirates is shrouded in mystery and not a little controversy. While there is little dispute that there was no such person by the name of 'Captain Charles Johnson' this had led to much speculation about who the author really was. Highwaymen and Pirates demonstrates a knowledge of the sailor's speech and life, which to some people suggest that he could have been an actual sea captain. He could also have been a professional writer, well versed in the sea, using a pseudonym. This has led some to believe that he could have been the playwright Charles Johnson, who had an unsuccessful play the Successful Pyrate in 1712. This glamorized the career of Henry Avery and caused a scandal at the time for praising a convicted criminal. The American scholar and expert on the writings of Daniel Defoe claimed in 1934 that Defoe was actually the author of A General History and the influence and credibility of Moore led many to recatalogue A General History with Defoe's other known works. However, there is no documentary evidence linking Johnson to Defoe and the identity of Captain Johnson will probably remain a mystery adding to the compelling nature of the work. The original publication was assembled using contemporary newspaper accounts, Admiralty Court Records and a number of interviews and as a result the work has become the most influential source in shaping conceptions of pirates and remains one of the prime sources for the biographies on some of the best-known pirates today. This edition of Highwaymen and Pirates contains 512 printed pages, a dozen or so pen and ink sketches and is fully indexed. The Index contains the names of the highwaymen and pirates and and many names are annotated with one or two dagger marks. One dagger symbolised the fact that the individual had committed murder, two daggers that 'they were guilty of numerous or atrocious acts'. More than 120 biographical sketches of varying length are included in Highwaymen and Pirates and all of the best-known pirates are present and include to two infamous female pirates Ann Bonney and Mary Read. Perhaps the best-known work ever published on pirates and highwaymen, Captain Johnson's The Lives and Actions of the Most Noted Highwaymen, Street-Robbers, Pirates, is not to be missed.