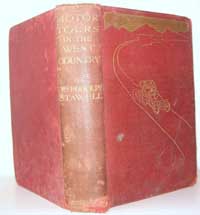 Republished here on fully-searchable CD-Rom is the first edition of Mrs Rodolph Stawell's Motor Tours in the West Country. Published by Hodder and Stoughton in London in 1910, this was the companion edition to Stawell's previous Motor Tours in Wales and Yorkshire, whose popularity witnessed second editions within a year of their initial publication. Containing some 230 printed pages, the original publication is fully-indexed and includes a map of the route taken by the author and her photographer-husband, Rodolph de Salis Stawell, an Australian, who had married Maud Margaret Key in Ireland in 1900. Rodolph Stawell is credited with taking the 48 black-and-white photographs that illustrate Motor Tours in the West County none of which, unfortunately, reveal the author or photographer, but their 'motor' can be seen passing through Cheddar Gorge on page eight. Maud Stawell was a well-known author and translator prior to her marriage to Rodolph Stawell and is perhaps best-remembered for her collaboration in writing and retelling Fabre's Book of Insects, which had been translated by Teixeira Mattos from Souvenirs Entomologiques. In its review of Motor Tours in the West Country the New York Times wrote that Stawell's intention was fun book primarily written for travellers, while at the same time intending to help the motorist of who their must have been very few. Hodder and Stoughton also viewed Motor Tours of the West Country as having very little in 'common with the dry-as-dust matter of fact guide-book', but was rather a 'delightful volume is specially written for those who like to know something of the history and antiquities of the places through which they pass, and for the lovers of beautiful scenery'. Stawell discusses the principal roads in Devon and Cornwall in considerable while only two chapter, the first and last, are given over to Somerset. Each of the seven chapters is preceded with a summary of the distances covered. In chapter one, for example, the Stawell's begin their tour in Bristol at the Clifton Suspension Bridge, before travelling to Clevedon, Wells, Ilchester, Crewkerene and arriving at the Devon border some seventy-seven miles later. Of the roads, Stawell writes that there are no bad gradients except near chard, which was a 1 in 8; the road surface from Clifton to Ilchester was poor; Ilchester to Crewkerne, fair; and from Crewkerne to the Border, extremely good. Needless to say, the author has no mention of traffic, how different from today. The preceding chapters include the Heart of Devon from the border to Tavistock; the South Coast of Devon, from Exeter to Plymouth; South Cornwall, from Plymouth to Land's End via St. Buryan; North Cornwall, the longest tour of some 198 miles, from Land's End to Morwenstow; North Devon, from Morwenstow to Porlock and finally back to Somerset, from Porlock to Yeovil. A beautifully observed account of the stunning scenery through which the Stawell's pass, which presents an honest account of both the difficulties encountered by early motorists - gradients, gravel and hair-pin turns are amongst the many - and the delights of travelling at speeds of almost forty miles per hour in an open-top motor. A truly delightful read and one that must appeal to anyone who enjoys travel literature and the counties through which the Stawell's pass on their tour.

The Origin and History of Irish Names of Places (First Series) 4th Edition, 1875