T. Bulmer, A History and Directory of Newcastle-Upon-Tyne, 1887 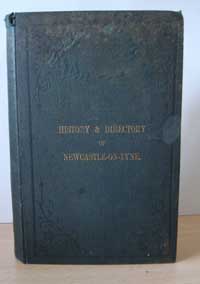 First published in 1887 and republished here on fully-searchable CD-Rom is Bulmer & Co's History and Directory of Newcastle-Upon-Tyne. Containing over four-hundred printed pages the History and Directory provides an excellent account of the town of Newcastle and its outlying townships and will be a desirable acquisition for anyone interested in the history of Newcastle-Upon-Tyne and its merchants, traders and residents and the time in the mid-1880s. The History & Directory of Newcastle-Upon-Tyne not surprisingly begins with the areas history, the starting point for which is the Roman settlement of of Newcastle and the monumental achievements of Roman engineering that could still be witnessed. This is followed by brief accounts of the Saxon period before the onset of t he Norman Conquest, the construction of the town's castle and outworks as well as the defensive that were constructed at this period. A great amount of details is given over to the various monastic settlements and orders that were founded in Newcastle and the buildings associated with these such as the Hospital of St. Mary Magdalene, St. Mary's Hospital and the Maison de Dieu. The various guilds and and their incorporation by Royal Charter are also described. These include the merchants, founded in about 1300, the skinners, tailors, bakers, brewers, smiths, dyers, tanners, cordwainers butchers, mercers and boothmen. The history also describes the establishment of other bye-trades and societies, such as glazier, colliers and curriers. Also recorded in the history of Newcastle-Upon-Tyne are the Governors of the Castle of Newcastle, the town's early municipal government, freemen of the town and the various churches that were found within the limits of the town. Needless to say there is also an account of the coal trade and the role played by the town and citizens of Newcastle during the Civil War and the later Restoration, before embarking on accounts of the schools and public institutions of the town. The Directory portion of the publication contains some three-hundred pages. Beginning with twenty pages of information on the municipal and civil and local administration of the town the majority of the entire history and directory is taken-up with an alphabetical list of the residents, merchants and traders of the town followed by an alphabetical trades and professions directory - the importance of coal mining and associated industries and trades is witnessed in this section of the Directory. While there is no street directory present in this publication, it is sure to appeal to anyone interest in the history and residents of Newcastle-Upon-Tyne in the 1880s.