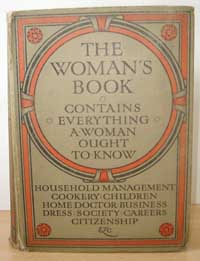 First published in 1911 and republished here on fully-searchable CD-Rom is The Woman's Book: Contains Everything A Woman Ought to Know. Containing more than seven-hundred printed pages this self-help manual for household management was, in its day, at the forefront of advice for women. Although the advice given is now, in the main obsolete and even offensive, books such as this brought into the open many subjects that had been hidden away in Victorian Britain. Appealing to the middle-class woman of a certain means, The Woman's Book, provides details on every aspect of household management, from money, to childcare, illness and entertainment. Edited by Florence B. Jack, with 'expert' contributions by Mrs Bernard Mole; Miss Fedden; Miss Maud Cookes; Miss Alice Lennon; Miss Margaret E. Buchanan; Miss M. Courtauld; Miss N. Edwards and Bertha La Mothe who provide information on the management and art of housekeeping, although in truth much of what appears in the publication appears to be about how to manage a husband. Beginning with 'The House', the thirty-four chapters that follow provides the reader with a plethora of advice. The House, for example, states that this is the most important choice that a woman will make in her life and a house should not be confused with a home. First considerations: to buy or to rent; locality; house versus flat; construction; site and soil; drainage; water supply; ventilation; lighting; heating; decoration; furnishing the home; flooring and floor coverings. Every room in the house is detailed as to its function and decoration with sketches of what they might look when finished as per 'Heal & Sons'. These follows chapters on 'Mistress & Servants, where the function, wages and relationship between every type of household servant and the mistress is explained in quite some detail. Further chapters of advice include those on household work - surely advice to passed onto the servants rather than the mistress herself - food and the kitchen and then the largest chapter in the book: 'Guide to Cookery'. Here, at least, The Woman's Book marks itself out as a forerunner to later manuals for the running of the home, especially those published during the inter-war period. In chapters such as 'Dress - its Choice & Care', 'Etiquette & Social Guide' and 'Management of Money & Legal Guide', The Woman's Book clearly identifies its intended readership. A strange chapter on home nursing and first aid concentrates on meals for patients and the convalescing, which include raw beef sandwiches, stewed pigeon, and veal panada. Howe any such contrivances were supposed the seriously ill to recuperate is mute. Ending with advice on what jobs are suitable for women, how to entertain in and out of the house and a plethora of miscellaneous facts and figures, The Woman's Book may now make entertaining rather than serious reading. However, given the time and context in which this self-help book for woman was published, it marks a revolution in as much as women were given active and very public advice on how they should and could run and control their lives if they so wished, very much the mistresses of their own house at least.