Cassell and Company, Cassell's Gazzetteer of Great Britain and Ireland, Being a Complete Topographical Dictionary of the United Kingdom. (6 Vols), 1899-1900 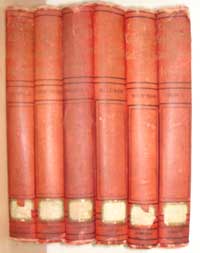 Published between 1899 and 1900 and republished here on fully-searchable CD-Rom is Cassell's Gazetteer of Great Britain and Ireland: A Complete Topographical Dictionary of the United Kingdom. Published in six volumes, the collection as a whole contains more than 3,000 pages, 60 coloured maps and many hundreds of illustrations throughout the text. Cassell and Co., Ltd was founded by John Cassell (1815-1865) who numbered amongst his early professions: carpenter, temperance preacher, tea and coffee merchant before turning to publishing in the 1840s. His first publication was a weekly newspaper, The Standard of Freedom and for a time continued to run a grocery business, which he coupled with publishing. As business expanded, Cassell rented a portion of the Belle Sauvage, an inn which doubled as playhouse and here he built his first printing works. Bankrupt by 1855, Cassell's underwent numerous changes in name reflecting the current owners and managers of the company until 1998 when it became part of the Orion Publishing Group. In the preface to the first volume of Cassell's Gazetteer of Great Britain & Ireland - A to CHED - released in 1899, it was believed by the publishers that their gazetteer and topographical dictionary met a need that had until that time not been met by any publisher and the scope of the six volumes was detailed in the following terms: the Gazetteer contains an alphabetical list of all of the counties, together with geographical features and river systems, Parliamentary Divisions, Baronies, Parishes - including acreage and soil - Townships, Cities, Boroughs, Towns, Seaports, Hamlets and Villages in the United Kingdom. Provided at the foot of each page is the population for each denomination as enumerated in the 1891 Census of Great Britain and Ireland and its distance from its nearest railway station and London or Dublin. Physical features are also recorded in the Gazetteer and these include Mountains and Hills - with their altitude - Rivers, Waterfalls, Capes, Lakes, Islands, Rocks and Shoals. Also described are Remarkable Antiquities, Earthworks, Ecclesiastical Ruins and Historic Houses. For each parish entry the acreage and nature of the soil is provided, the name of the parish church or churches, their dedication, architectural features and monuments; also recorded are other places of worship, schools, public buildings, historic events associated with the parish, eminent inhabitants, antiquities, natural features, trades and gentlemen's seats. Volume One of Cassell's Gazetteer and Topographical Dictionary contains 505 printed pages, more than 170 illustrations, which include photographs and sketches and 10 fold-out colour maps. Each of the following five volumes contains approximately the same number of pages, illustrations and maps as the first volume. Cassell's in one of the principal topographical resources for Briatin and Ireland and an essential reference work.