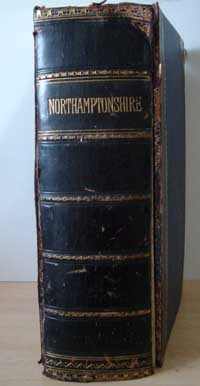 First published in London in 1874 and republished here on fully-searchable CD-Rom is the second edition of Francis Whelan & Co's History, Topography & Directory of Northamptonshire. Containing 950 printed pages the full title of this publication provides a good indication to the scope of the work: History, Topography & Dictionary of Northamptonshire; Comprising a General Survey of the County, History of the City & Diocese of Peterborough, with separate Historical, Statistical & Descriptive Sketches of all the Towns, Boroughs, Parishes, Villages, Chapelries, Hundreds & Manors, and a Variety of Archaeological, Architectural, Biographical & Geological Information; to which is added, a List of the Seats & Residences of the Nobility, Gentry & Clergy. Beginning with a number of indices to the volume, the names of magistrates sheriffs, seats of the nobility, fairs, the History, Topography & Directory of Northamptonshire, then provides a 'General History and Description of the County of Northampton'. Extending to some 100 pages, the General History includes descriptions of the state of agriculture, manufactures, geology and geography of the county before tracing the human habitation of the county from the ancient Britons, Romans, Anglo-Saxons, Danes and Normans and the advent of the Feudal system of Government of the county and strangely, perhaps, ending with the death of William the Conqueror. Included in this introductory 160 pages are descriptions of some of the county's antiquities, its ecclesiastical divisions and churches. Part II of the History, Topography & Directory of Northamptonshire consists of a detailed history of the town of Northampton, an alphabetical directory of merchants and traders as well as an alphabetical directory of classified trades and professions, which occupies over one-hundred pages The majority of the History, Topography & Directory of Northamptonshire is taken-up by the Towns, Parishes and Villages section of the publication. Containing some 750 pages this details all of the towns, parishes and villages in the county, initially arranged by the hundred in which they are situated. Beginning with Spelhoe Hundred and Higham Ferrers Hundred, the description of the entries, that of the Hartwell Parish within Cleley Hundred serves to illustrate the extant of the detail the reader can expect throughout. Introduced by its geographical location viz the parishes surrounding it, the population of the parish as per the 1801, 1831-71 Censuses of Population are provided. The soil was described as clay and two-thirds of the parish arable with the principal land owner, the Duke of Grafton also being the Lord of the Manor and the parish was rendered Hertewelle in the Doomsday Book. The Manor is described at various periods from the Doomsday Book, the reigns of Henry II, Edward III and Henry VIII in whose reign it came into the possession of the Duke of Grafton. Hartwell Park and the village are also described as the Parish Church, dedicated to St. John the Baptist, which was said to be Early English in construction. The parish charities and other religious houses are described as are the gentlemen's seats of Salcey Lodge and Hartwell Lodge. The entry is concluded by a list of the gentlemen residents and farmer in the parish. While this is the minimum level of detail that can be expected, larger towns cities and parishes, notably Northampton and Peterborough, warrant a much greater degree of description making the History, Topography & Directory of Northamptonshire a must for anyone interested in the history of Northamptonshire and its residents.