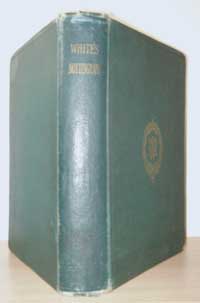 First published in Sheffield by William White Ltd., in 1894 and republished here on fully-searchable CD-Rom is the third edition of White's General and Commercial Directory of the Borough of Nottingham. Containing some 567 printed pages the subtitle of the publication indicates the breadth of the directory: including Old and New Basford, Carrington, Sherwood, Bulwell, Lenton, New Lenton, Radford, New Radford, Sneiton, Etc. Followed by a Trades Directory for the County. Although not indicated in the title, in the preface to this edition this Commercial Directory is described as a history, gazetteer and directory of Nottinghamshire, which more aptly describes this publication. White's Directory is prefaced by a seventy-page description of town and borough of Nottingham. Beginning with descriptions of the parishes and chief market towns that were situated within the parliamentary borough of Nottingham, the Directory then provides a history of the town from its ancient - or more correctly Danish history in about 868 - down to the beginning of nineteenth-century, before embarking on descriptions of the principal buildings and institutions of the town, beginning with the Castle. Numbered amongst the building noticed are the Castle Lodge, Mortimer's Hole, the Hollow Stone, Chapel Bar and the ancient gates and walls of the town. Municipal and Ecclesiastical buildings are described in some detail, beginning with the town's Guildhall. Also described in the introductory section are the town of Nottingham's educational establishments, which include the University and its buildings, colleges, grammar schools and the School of Industry, the libraries, literary institutions, museums, theatres, clubs and charities, concluding with a list of eminent men from Nottingham. The majority of White's General and Commercial Directory is given over to its various directories, the first of which is the Nottingham Street Directory., which provides an alphabetical street directory for the town covering some 150 pages. This is followed by an alphabetical directory of merchants, traders, etc., for the Borough of Nottingham, which also extends to more than 150 pages. Nearly 180 pages is given over to the final section of the directory, the Nottinghamshire classified trades and professions directory. This alphabetically lists by trades all of the classified tradesmen and women and professional people in the county. While White's General and Commercial Directory might not carry as much detail on local government, civil authorities and municipal functionaries as Kelly's Directories would, this General and Commercial Directory provides complete street and trades directories for the Borough of Nottingham and will make a valuable addition to those interested in the town and borough of Nottingham.

The Poll at the Election of High Steward of the University of Cambridge, 1840 (DOWNLOAD)