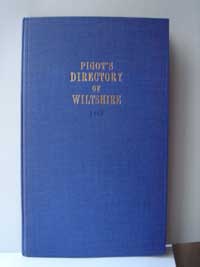 First published in 1848 and republished here on fully-searchable CD-Rom is Pigot & Co.'s Directory for Wiltshire. Although containing only forty-six printed pages, Pigot's Directory of Wiltshire for 1848 has the distinction for being one of the earliest complete topographical and trades' directories for the county and for this reason if no other it is a notable publication and one of considerable merit and interest. This edition includes a coloured map of the county showing all the towns and villages and well as gentlemen's seats as well as other geographical and topographical features of interest. The successor to Pigot & Co., namely Kelly & Co., who went onto to successfully publish county directories for more than a century adopted the format first utilised by Pigot's and merely expanded and enlarged on the amount of published material. Starting with a brief historical and topographical sketch of Wiltshire, Pigot's Directory then presents in alphabetical order the county Directory, which forms the vast bulk of this publication. Beginning with Aldbourn and ending with Wootton Bassett and the surrounding neighbourhoods, Pigot's Directory of Wiltshire functions as a trades as well as a topographical and historical directory for the forty-two largest towns and villages and their immediate neighbourhoods in the county in 1848. An example of one of the village entries, Wootton Bassett, is illustrative of the detail contained in the directory as a whole. Wootton Bassett is described as a market town, borough and parish situated within the hundred of Knightsbridge some 89 miles from London and a short distance from a station on the Great Western railway line. Within the vicinity of the town is a natural spring, the water from which was said to have curative powers. No manufacturing was conducted in the parish as the chief mode of employment was agriculture. The town was governed, by virtue of a Charter granted by Henry VI by the mayor, town burgesses and aldermen and until 1832 the town returned two members to Parliament. Lord Clarendon was the Lord of the Manor and the Court Leet was held annually at the well known Old Royal Oak public house. The Parish Church of All Saints was of great antiquity and the town was also provided places of worship for independents and Methodists, a free school established in 1688 as well as a number of charity schools. There were a number of weekly and bi-annual fairs, the former chiefly for pigs and sheep, the latter for the hire of servants. The 1841Census returned a population of nearly 3,000 with the proviso that some 800 of these were temporary occupants employed on works for the Great Western Railway. There follows a list of the gentry and clergy, academies and schools, professional persons as well as shopkeepers and traders, inns and public houses. The level of detail provided for Wootton Bassett is the norm, while that of major towns such as Salisbury and Swindon is considerably greater. As one of the earliest complete topographical and trades' directories for Wiltshire, Pigot's Directory for 1848 must prove to be particular interest to anyone with an interest in this county.