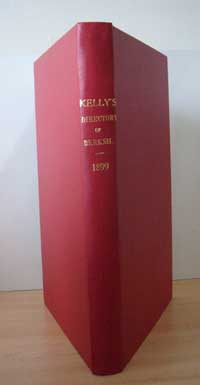 Republished here on full-searchable CD-Rom is Kelly's Directory of Berkshire, which was published in 1899. Containing some 410 printed pages, Kelly's Directory, as the then editor, A. Lindsay Kelly correctly noted, was primarily a directory, but also served as the gazetteer for every county for which Kelly's Directory was published, and this Berkshire edition is no exception. This directory includes every parish in the county and provides a thorough topographical description of every town, parish, village and township, describing the principal buildings and geographical objects of interest in each. Great care is also taken in Kelly's treatment of the ecclesiastical divisions of the county with descriptions of all the churches, cathedrals the value of the livings, parochial incumbents and patrons. The same level of detail is provided for the civil and local administration of the county with full information on county courts, districts fairs, markets, county hunts as well as communications such as rail and post throughout the county. Beginning with Abingdon and ending with Yattendon, for those who might be unfamiliar with a directory such as Kelly's the degree of information contained on each village can be gleaned from the description of just one of the places entered in the Towns and Villages section of the directory. Shinfield is described as a village and parish 3¼ miles from Reading. Situated in the Southern Division of the County and partly in the Hundred of Theale and partly in that of Charlton, Union of Wokingham, rural deanery of Reading, archdeaconry of Berkshire and Diocese of Oxford. The Rover Loddon passes to the south-east of the village and the parish Church dedicated to St. Mary was described as an ancient structure built in the Old English style. Built of fling, the church consisted of a chancel, nave, porch and embattled tower containing several bells. The seats and pulpit were made of oak and the church had been completely restored in 1857. The parish registers dated from 1649. The parish also contained Methodist and Congregationalist Chapels. The Lord of the Manor was Alexander Cobham of Shinfield Grange. The chief crops of the parish were wheat, oats and barley and the soil was principally gravel and clay. The parish consisted of 4,290 acres with a population of 1,493 at the time of the enumeration of the 1891 Census. The entry for Shinfield also includes by a list of amenities in the parish, such as post offices and charitable and endowed schools mainly situated in the principal village of Three Mile Cross. There is also a list of the principal private residents and commercial interests in the parish. While Shinfield was a relatively small hamlet within the county of Berkshire as a whole, the level of detail recorded here is typical throughout the directory. The degree of information for the principal and county towns, such as Reading, is considerably greater and includes street directories as well as lists of private residents and commercial interests. This edition of Kelly's Directory of Berkshire is prefaced by a topographical and geological description of the county and is concluded with an extensive alphabetical list of the county's chief residents and commercial interests, which could be found across the length and breadth of the county in 1899. For anyone with even the slightest interest in the residents, topography of descriptions of the county of Berkshire this fully-searchable 1899 edition of Kelly's Directory of Berkshire is heartily recommended.

The Registers of the Parish Church of Cartmel in the County of Lancaster; Christenings, Burials and Weddings, 1559-1661

Rev. William Thos. Adey, All About Kingsbridge and Salcombe, A New and Practical Illustrated Guide for the Use of Visitors, 1903