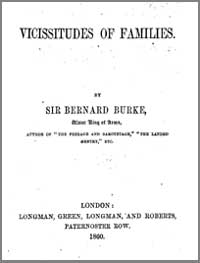 First published in London in 1860 and republished here on fully-searchable CD-Rom, is the first edition of Sir John Bernard Burke's Vicissitudes of Families. Containing some 440 printed pages, this publication charts the rise and often fall of some of the most noted families of Europe and especially Ireland and the vicissitudes that caused these changes in circumstance. Sir John Bernard Burke (1814-1892) was born in London, the son of John Burke (1787-1848) and educated in France. Like his father, Sir John was first and foremost a genealogist. In 1826 John Burke issued the first edition of a Genealogical and Heraldic Dictionary of the Peerage and Baronetage of the United Kingdom. From 1847 to the present day this has been published annually and is generally known as Burke's Peerage. After his father's death Sir John took control of his father's publications and issued for the first time The Royal Families of England, Scotland, and Wales, with their Descendants. In 1853Burke moved he was appointed Ulster King at Arms and was knighted the following year. After his appointment as Keeper of the State Papers of Ireland, Burke moved to Dublin and eventually died there in 1892. In addition to his editorial work on Burke's Peerage, Sir John also issued a number of companion volumes of this flagship publication, including the Landed Gentry of England and later for Ireland, while also continuing his father's Dictionary of the Peerages of England, Scotland and Ireland, extinct, dormant and in abeyance. Integral to Burke's study of armorists was his 1878 publication Encyclopaedia of Heraldry, or General Armoury of England, Scotland and Ireland. In addition to these works, Burke is credited with a number of publications in his own right, rather than as general editor. These included The Roll of Battle Abbey (1848); The Romance of the Aristocracy (1855); The Romance of the Forum (185-); The Rise of Great Families (1882) and the Vicissitudes of Families (1860). At the time of his death Burke was succeeded as editor of Burke's Peerage by his fourth son, Ashworth Peter Burke and another son, Sir Henry Farnham Burke, would eventually rise to the position of Garter Principal King of Arms. Vicissitudes of Families details the vagaries of personality, events and history that led to the rise, but in most instances the fall of a number of celebrated families, some titled, some ennobled and some mere commoners. In his preface, Burke remarks that the vicissitudes experienced by what could be called the 'old aristocracy' could hardly, if ever, be separated from the national history of the country. In other cases the vicissitudes of families was often created by instability of mind or by the inheritance of an illegitimate issue or more commonly by lack of issue altogether. Burke illustrates these causes of vicissitude by choosing nineteen cases where families experienced huge changes in fortune. Numbered amongst these are the French Bonapartes, the bodice maker of Bristol and and the Lairds of Westquarter. However, it was to Ireland that much of Burke's attention was drawn with chapters on the exiled O'Donnells, the Clan MacCarthy, the Desmonds and the Kings of Meath, the O'Melaghlins. Sometimes sad, always entertaining and not a little surprising in places, the Vicissitudes of Families makes for highly entertaining reading.