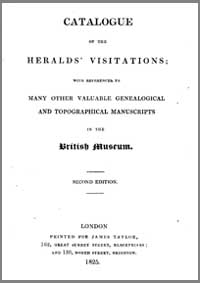 During the 1500s and 1600s the Heralds visited each of the counties of England as well as Ireland, Wales and Scotland. The purpose of the visits was to record the pedigrees of families, which in some cases dated back to the 11th Century. These records are an extremely important source for genealogists. This fully searchable publication is a catalogue of the manuscripts held at the British Museum. This publication is broken down by individual county as well as separate sections on Wales, Scotland and Ireland and includes a reference to the Harleian Society manuscripts. Also included are references to other genealogical sources, manuscripts relating to foreign heraldry, dates of all the Heralds' Visitations and a numerical index to the Herald's Visitations. This is a valuable source for anyone exploring the Visitations of the Heralds.

Cassell and Company, Cassell's Gazzetteer of Great Britain and Ireland, Being a Complete Topographical Dictionary of the United Kingdom. (6 Vols), 1899-1900