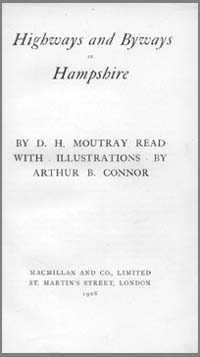 Originally published in London 1908 by MacMillan & Co., Ltd., this first edition of the Highways and Byways in Hampshire, is republished here on fully-searchable CD-Rom. Macmillan began publishing the Highways & Byways series in 1899 and by 1909 had completed almost twenty publications in the series, which extended across the length and breadth of England, Scotland and Wales, with one publication on Normandy and and another on Ireland. This highly popular series continued until the beginning of the Second World War. The original publication of the Highways and Byways in Hampshire contains more than 450 printed pages recording the meandering routes taken by the book's author, and more than 90 pen and ink illustrations by Arthur B Connor, providing as with all of the Highways and Byways series a wonderful mix of topography, local history and folklore, which perhaps more than ever allows the reader to rediscover parts of Britain that have long disappeared or have been forgotten. Much of the charm a vigour of the Highways and Byways series which has stood the test of time is down to the travellers and in the case of Hampshire this is no exception. There can be little doubt that Moutray Read had a deep affection for the county of Hampshire, declaring it to be "the most perfect of English Counties". With Southampton as a starting point much of the county was covered by the author on his travels and coupled with the copious illustrations this publication reintroduces the reader to the bygone charms of this county.

Pinnock's County Histories, The History and Topography of Durham with Biographical Sketches ... and a neat map of the county (undated, c.1820)