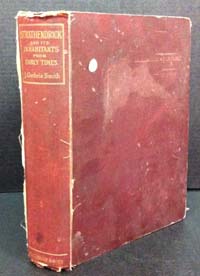 Strathendrick, situated along the shore of Loch Lomond is a particularly beautiful and picturesque part of Scotland. Published in 1896 Strathendrick and its Inhabitants from Early Times was completed after the death of it's author John Guthrie Smith in 1894. Guthrie Smith was a well known Scottish historian and antiquarian who published a similar work on the Parish of Strathblane in 1886. He was also the author of several treatises and digests on the law in Scotland. This edition begins with an extensive memoir of the author himself. The main body of the publications begins with the ecclesiastical history of the area, covering Fintry, Balfron, Killearn, Drymen, Buchanan, and Kilmaronock separately in individual chapters. This is followed by a history of some of the leading families of Strathendrick and the lands of the area, such as the Grahams of Fintry, the Galbraiths of Culcreuch, the Napiers, the estates of Aucheneck and Dalnair, as well at the Temple Lands of Letter and Balglas. The final part of the book is made up of the Buchanan genealogies. Much like the previous sections of the book each branch of the family is given its own seperate chapter. Beginning with the Buchanans of Buchanan and the arrival in to Scotland from Ulster, continues with the Buchanans of Leny and Cadets, Drummikill and Cadets, Carbeth and Cadets, Arnpryor, Spittal and finally Auchmar. This part of the publication is enhanced with the inclusion of two extensive family trees. Spread over 450 pages this is an enormously detailed history of Strathendrick, its lands and its families. Including images, a large map and the family trees, this publication is a must for anyone with an interest in Strathendrick.