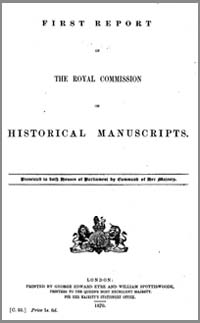 The Historical Manuscripts Commission was established by royal charter in 1869 with the express purpose of reporting on papers of historical interest in private keeping. The first two reports, dated 1870 and 1871, are republished here. They cover 520 pages, and show that the body was exceptionally active in fulfilling the task assigned to it. The first report is 13 pages long, with a 133 page appendix. This appendix gives the various separate reports for each collection or location visited. It commences with a detailed look at the records of the House of Lords, and then proceeds to cover a great many aristocratic residences, such as Kimbolton Castle, Blickling Hall, Hatton Collection, Crome Court, Macclesfield, Tabley House, Trelawne, Stanford Court, and many others. Sevceral Cambridge colleges are reported on, as well as some important religious instiutions, like Norwich cathedral. The English report concludes with a look at some town and city corporation records, such as Bridgewater and Coventry. There is a detailed report for Scotland, with extended treatment for Hamilton Palace, titled aristocrats like Richmond and Lothian, the Catholic Bishop of Edinburgh, the University of Edinburgh, and corporations of Glasgow & Edinburgh. A small number of reports are published for Ireland, including the aristocratic collections of Charlemont, Rosse, and Talbot de Malahide, and the corporations of Dublin, Kilkenny, Limerick, Waterford and Cork. The second is 22 pages with an appendix of 263 pages. This covers many more places, including early reports on collections which were to become hallmark series for the HMC such as Bedford and Ormond. There are 41 English aristocratic collections, 17 for Scotland and 7 for Ireland, along with several colleges and corporations. The two volume set is then completed with a comprehensive 85-page index. This publication is essential for scholars of early modern and medieval history in Britain or Ireland.