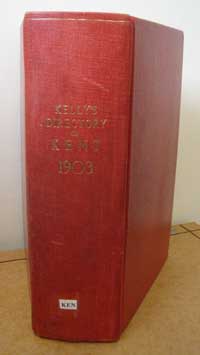 Republished here on full-searchable CD-Rom is the 1903 edition of Kelly's Directory of Kent. Containing more than 1,200 printed pages, which includes an A2 sized coloured map of the county, as with most other directories published by Kelly's, this 1903 Kent edition, although primarily a directory, also serves as a gazetteer. The Kent Directory details every village, town and city in the county providing thorough topographical and statistical descriptions of all of the religious, educational, civil and municipal institutions contained in each. In most instances the Directory also provides a brief historical account of the village or town under consideration, which often includes important events and personages connected with the locality. As a preface to this edition a general history of the county as well as a description of its geology is also given, together with all the seats of the nobility and gentry found throughout the county. At the time of the publication of the 1903 edition of Kelly's Directory for Kent many suburbs and areas that now form part of Greater London were considered to be part of Kent proper, towns such as Peckham, Penge and Sydenham, and as a consequence these were included in the 1903 edition. For any reader who might be unfamiliar with a directory and gazetteer such as Kelly's the degree of information contained on each village can be gleaned from the description of one of the first entries in the alphabetical Towns and Villages section, which constitutes the bulk of the directory. In describing the market town of Ashford it was noted that the name of Ashford was derived from its situation on the Esshe river. The importance of Ashford was at time of publication derived from the fact that it was the site of the central station and locomotive works of the South Eastern and Chatham Railway. The principal church, St. Mary's, was rebuilt in 1885 and could sit 1,750 worshippers. The parochial records for the parish dated from 1570 and contained many curious entries, not least from the Commonwealth period. Other principal buildings noticed were Christ Church, the Catholic Church of St. Teresa, the Corn Exchange, Fire Brigade, Swimming Baths, Flour Mills and Hospitals and many others. In addition to these notices, the Directory also provided information on the Official Establishments, Local Institutions, Magistrates, Urban & Rural Councils, Public Offices, Places of Worship, Schools, Newspapers and Carriers. As with each of the towns and villages noticed, the entry is concluded with an alphabetical list of private residents, a useful adjunct to the 1901 Census. For some of the major towns, additional information, such as local businesses are also provided. The level of detail provided in the Directory of Kent for the market town of Ashford is typical of the Directory as a whole. The alphabetical list of villages and towns is followed by a county-wide alphabetical listing of Kent private and residents, as well as Trades and Professional Directory for the County. The Directory of Kent is concluded by 178 pages of advertisements from establishments throughout the county, many of which include illustrations and photographs of the advertiser, which will prove of great interest to some readers.