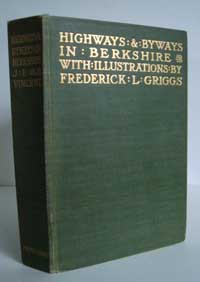 Originally published in London 1906 by MacMillan & Co., Ltd., this first edition of the Highways and Byways in Berkshire, is republished here on fully-searchable CD-Rom. Macmillan began publishing the Highways & Byways series in 1899 and by 1909 had completed almost twenty publications in the series, which extended across the length and breadth of England, Scotland and Wales, with one publication on Normandy and and another on Ireland. This highly popular series continued until the beginning of the Second World War. In May 2009 Pan Macmillan reissued a one-volume collection of the best of the Highways and Byways series offering a glimpse of the very best of Britain. The original publication of the Highways and Byways in Berkshire contains more than 440 printed pages and several maps of the county, but alas not one of the route of the author, James Edmund Vincent, who chose to take many short trips from central points, and 77 pen and ink illustrations by Hugh Thomson, providing as with all of the Highways and Byways series a wonderful mix of topography, local history and folklore, which perhaps more than ever allows the reader to rediscover parts of Britain that have long disappeared under a morass of concrete, which with its proximity to London is perhaps more the case with Berkshire than many other counties in the series. Vincent undertook only thirteen 'expeditions' as he called them on which he reported in the Highways and Byways in Berkshire, perhaps because he chose to tarry for so long at a number of his stops, namely Windsor Castle and the Berkshire Downs. The remainder of Vincent's tours are recorded as follows: the fascination of Berkshire; the Berkshire Downs; the Stripling Thames; North Side of the Vale - Abingdon; Northern Side of the Vale - An Expedition; North of the Vale - Second Expedition; from Abingdon - Third Expedition; with Wallingford for Centre; King Alfred's Country; by Thames' Side; Windsor and its Castle; in the Forest Country; Berkshire and the Civil War. Much of the charm a vigour of the Highways and Byways series which has stood the test of time is down to the travellers and in the case of Berkshire this is no exception. James Edmund Vincent (1857-1909) was born in Wales; a solicitor, chancellor of Bangor Diocese, author and journalist, he became best-known outside of his native country as an editor of periodicals and a topographical writer. The Highways and Byways of Berkshire was one of Vincent's last works. The Highways and Byways in Berkshire are replete with 77 pen and ink sketches by Frederick Landseer Griggs (1876-1938). A native of Hertfordshire, this was one of thirteen books illustrated by Griggs in the Highways and Byways series. An architectural draughtsman, illustrator, early conservationist, associate of the Arts and Crafts Movement in the Cotswolds, Griggs was the most distinguished etcher of his age and the first etcher to be elected to full membership of the Royal Academy. His illustrations from this period 'capture a vanishing England of a brooding spiritual intensity, harking back to an idyll of vanished dreams' and as such fit very well with the general themes of the Highways and Byways series, that of a vanished or forgotten heritage. The presence of so many of Grigg's sketches in one place is sufficient reason to purchase any of the series in which he was the illustrator.