The 39th Report of the Commissioners of Her Majesty's Woods, Forests and Land Revenues. 1861 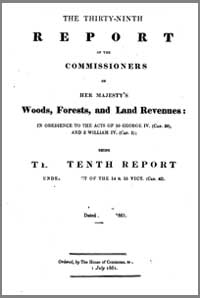 Republished here is the Thirty Ninth Report of the Commissioners of Her Majesty's Woods, Forests and Land Revenues from 1861. Comprising the reports of Mr Gore and Mr Howard, they account for the management of the property of Queen Victoria under their charge. This includes leases of land or houses belonging to the crown situated across England, and also of coal and other minerals under the sea, adjacent to the English coast. However, like many of the parliamentary reports what is most interesting is the appendices. The estates included in Mr. Gore's report are Eltham Estate, County of Kent, Horton Farm, County of Wilts, Humburton Estate, County of York, the Manor and Demesne Lands of Langton, County of Lincoln, Farm at Hodroyd and Heindley, County of York, and the Long Walk, Windsor Great Park. The appendices to Mr Gore's report include a schedule of Leases of Messuages, Tenements and Hereditaments for the year ending March 1861, schedules of sales, taxes, exchanges between the crown and individuals, rents, and a statement of his accounts. These schedules include the names of almost 200 people or companies who were involved in these transactions as well as descriptions of properties. Mr Howard's report follows a similar format, covering a larger number of estates, including New Forest, County of Southampton, Dean Forest, County of Gloucester, Manor of Staunton, County of Gloucester, Salcey, County of Northampton, Woolmer, County of Southampton, Delamere, County of Chester, Forest of Epping, as well as crown properties in Scotland, Wales, Isle of Man and Ireland. There are the details of approximately another 500 individuals and companies in the appendices here, which are concluded with various statements of account and an index. This publication provides a fascinating insight in to the management of Royal lands in England, Wales, Scotland and Ireland, as well as the sorts of people and companies the managers interacted with.

Articles Presented to the Cumberland and Westmorland Antiquarian and Archaeological Society, 1904