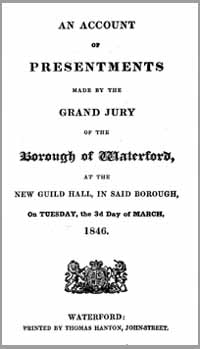 "An account of Presentments made by the Grand Jury of the Borough of Waterford at the new Guild Hall, in said borough, on Tuesday the 3rd day of March 1846" is a reckoning for the local government of the borough, and records the financial and other actions of the grand jury (named). The issues addressed include charities, coroners inquests, deserted children (22 children and their nurses named), salaries of borough officials, the district lunatic asylum, police, jails, road repairs, income, and all the various proposals and decisions of the Grand Jury taken at the Spring assizes 1846. It is a fascinating insight into the operation of local government by the Grand Jury system which pre-dated the city council, and will appeal to anyone who has an interest in the history of Waterford city.