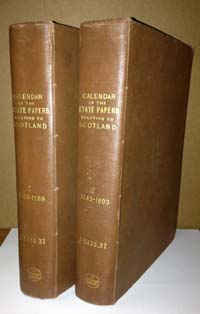 These volumes span over 1,100 pages and list in detail archives held in what was then the Public Record Office London (now the National Archives in Kew). The catalogue covers two major groups of records. The first are diplomatic correspondence between England and Scotland or other interactions between these two sovereign states, their agents, officers and spies. The second are papers concerning the captivity and eventual execution of Mary, Queen of Scots. Scotland, at this time, was as foreign a place as France to the English. It was difficult to get to and generally hostile. There are numerous papers concerning the regular border incursions and outright invasions by either side, as well as much on the religious convulsions spawned by the Protestant reformation. These volumes are an essential source for the study of these islands insofar as Scotland and Scottish aristocrats were as much a meddler in Irish affairs, as England was in Scotland. The calendar was produced by Markham John Thorpe, and published in 1858. For the study of Scotland it represents one of the more important archival resources available.