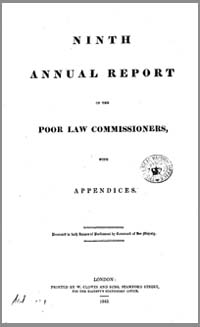 Published in 1843 the Ninth Annual Report of the Poor Law Commissioners continues to chart the hardship and distress of many of the destitute and the working classes. The report focuses primarily on England and Wales but there is some information for Ireland too. The early part of the report by the Commissioners focuses England and Wales and on how the situation has changed since the previous report. What is immediately clear from the report is that declining demand for manufactured goods had lead to many being made unemployed in the manufacturing districts, among them Leeds, Bradford, Sheffield, Staffordshire, Warwickshire and Shropshire, creating enormous difficulty for the Poor Law Unions and Parishes in those areas and putting huge strain on their resources. The remainder of the report on England and Wales looks at ways to amend the Poor Relief Laws to allow for standardisation across the country as well as the better operation of the poor relief system. The Irish part of the report beings with an update on the construction of workhouses in Ireland moves on to the often occurring seasonal shortage in potatoes, which they point out is often exacerbated by people hording large stores of the crop at time so need in the hope of selling them at "famine prices". The reminder of the Irish report deals mainly with rates and expenditure. Appendix A of the report deals with individual reports from Assistant Commissioners from the following places, the Chorlton Union, the City of Exeter, Salisbury, the city of Bristol, Canterbury, Oxford, Birmingham, Covnetry, Kingston-Upon Hull, as well as several other parishes and unions. Appendix B deals with various orders, explanations, letters and minutes of the various commissioners in England, Wales and Ireland. Appendix C deals covers tables and returns and Appendix D covers the Poor Rate Returns for England. For anyone with an interest in how the huge numbers of unemployed and poor of England, Wales and Ireland lived at this time, and how the government planned to alleviate the hardship, this is an essential and fascinating publication.

The History of the Irish Nation. 1876

A Short History of the Kingdom of Ireland, 1885