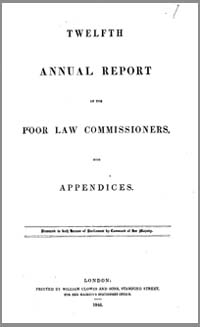 Published in 1846 the Twelfth Annual Report of the Poor Law Commissioners continues to chart the hardship and distress of many of the destitute and the working classes. The report focuses primarily on England and Wales but there is some information for Ireland too. This report is important because it is the first full report since the widespread failure of the potato crop in 1845. Much of the report of the commissioners for England and Wales is made up of accounts and technical breakdowns of points of law, there some interesting notes on the increase in labour as well as increases in sponsored emigration, particularly to Australia. There are also several reported cases of infanticide, committed by mothers of illegitimate children. Much of the nature of the Irish section of the report is similar to the England and Wales report. The report does remark that "the financial state of the Unions in Ireland has never been more satisfactory". And while there is not a lot of ink devoted to the potato failure it is noted that the numbers in the workhouses had increased week on week for the year. The Appendices to the report provide a huge amount of information. Appendix A covers the various orders, circular letters and reports, including a report on the failure of the potato crop and the effect on labourers. Appendix B covers the various table and returns. While Appendix C is an account of the money levied and expended by the Poor Law Unions for the year ending 1845. The report is completed with a plan of a workhouse site and buildings in Ireland as well as a sketch of a temporary fever ward. For anyone with an interest in how the huge numbers of unemployed and poor of England, Wales and Ireland lived at this time, and how the government planned to alleviate the hardship, this is an essential and fascinating publication, particularly at it marks the beginning of a long struggle with the failure of the potato crop.