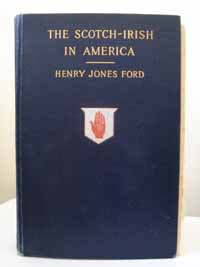 The Scotch-Irish in America was first published by Princeton University Press in 1915 and was written by Henry Jones Ford, Professor of Politics at the University. Containing some 607 printed pages Ford's history of the Scots-Irish, although almost a century old, is still seen by many as the seminal introduction both to the plantation of Ulster and the exodus of the Scots-Irish from Ulster to America. Researched from a multitude of secondary and primary source material such as the Calendars of State Papers for Ireland, America the West Indies as well as the Carew Manuscripts, Ford's aim in publishing The Scotch-Irish in America was an ambitious attempt to describe the events that led to the creation of a people with a unique and describable psyche and how the mass-exodus of this group of people from Ulster helped to create an independent America. Although written by an academic with the rigours of academic research to the fore, Ford's presentation of this monumental work is far from dry and is very readable. Introduced with a description of the Ulster Plantation before the arrival of the Scots in Ulster in the chapters that follow Ford describes in general terms the nature of the Scots that were attracted to the Ulster Plantation as well as the causes of their migration from Scotland to Ireland at the beginning of the 17th century. He also amply describes, primarily through the utilisation of the various collections of State Papers at his disposal the migration of the Scots to Ulster as well as their formative influence on the development of a unique Ulster identity. These chapters hugely benefit from a number of appendices including a list of the 'Scottish Undertakers' who were amongst the first to apply for grants of land in Ulster in September 1609. However, it is to the second mass-exodus of Scots-Irish to America that began towards the end of the 17th century to which Ford gives greatest emphasis in his work. Beginning with a description of the most-prominent Scots-Irish settlements in America such as Maryland and Pennsylvania, Ford provides entire chapters describing the Scots-Irish settlement of New England, New York, the Colonial Frontiers and the Jerseys before detailing their dominant role in the development of the American Presbyterian Church. Ford Concludes The Scotch-Irish in America with chapters on the Scots-Irish involvement in the westward expansion of America, as well as the roles played in the development and spread of popular education and the birth of the American nation by many individuals that would have identified themselves first and foremost as Scots-Irish. The Scotch-Irish in America is concluded with a number of very interesting appendices such as the list of Scottish Undertakers and Galloway's Account of the American Revolution as well as a list of sources and full index of persons and places cited in the publication. Republished here in fully-searchable electronic format, The Scotch-Irish in America is a must for anyone interested in the Scots plantation of Ulster and their subsequent role in the development of an independent American nation.