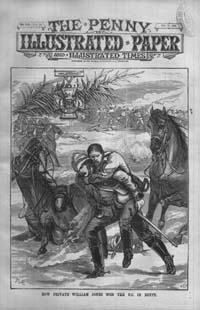 First Published in October 1861 The Penny Illustrated Paper and Illustrated Times was the cheaper cousin to the more illustrious and ground-breaking Illustrated London News, which cost six pence. Costing just a penny (1d) The Penny Illustrated Paper promised to be the friend of the people. Each issue was filled with sketches, graphically bringing the world news to the reader, as well as opinion pieces, gossip and a small section of advertising. This edition, from October 21, 1882, deals primarily with the recent war in Egypt against Arabi Pasha. It was this war which ultimately led to the occupation of Egypt by British forces.

Walter Jerrold and Hugh Thomson, Highways and Byways in Middlesex, 1909