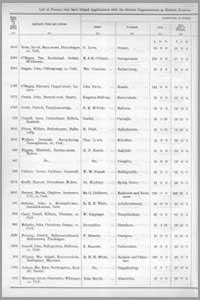 Regarding the appliations from evicted tenants: the explanation states
" ... the four Reports presented here are amongst the last occasions of evicted tenants from landed estates in Ireland prior to Ireland's independence, compulsory purchase of landed estates and the exodus from Ireland of former landlords."
This sounds very interesting but what would be the date range of these reports referenced here?
Thanks,
Ellie H.