The History, Topography and Antiquities of the County and City of Limerick, 2 Vols. 1827 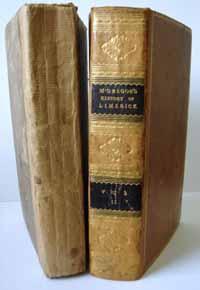 Originally published in Dublin 1826 and 1827 the two volume History of Limerick is a monumental study in every aspect of the county and one that every historian writing on the county still pays heed and respect to. The two volumes taken together contain more than 1,100 printed pages and are republished here in fully-searchable electronic format. There is little indication in the preface to either volume 1 or volume 2 of The History of Limerick as to how long the endeavour may have taken the co-writers, Rev. Patrick Fitzgerald and John James McGregor, but even with the aid of the most eminent historians and local history experts of the days, such as James Hardiman and Sir William Betham, their endeavour must have taken many years. The History of Limerick is divided and presented in two separate volumes, the first published in 1826, is simply entitled The History of Limerick, and its four-hundred or so pages serve as a preliminary or introduction to its companion volume. Over half of the first volume is taken-up by a survey of the history and antiquities of Ireland, ranging from the colonization of the country, down to its literature, poetry, music and natural beauties before the authors turn their attention to the topography and antiquities of county Limerick, which they detail barony by barony. Volume 1 is concluded with a series of statistical tables drawn from the recently published 1821 Census of Ireland. With the preliminary survey of Ireland and Limerick successfully completed, Fitzgerald and McGregor turn their attention in volume 2 of The History of Limerick solely to the county and city of their title. The second volume was published as The History, Topography, and Antiquities of the County and City of Limerick; with a Preliminary View of the History and Antiquities of Ireland. This two-volume publication is more often than not know collectively by this title, with the second portion paying heed to volume 1. Volume 2 contains some 700 printed pages and in many respects is the more satisfying historical account. The first half of this volume is given-over to a detailed account of the political and military history of the city and county of Limerick from the earliest times to the first decade of the 19th century. The divide is made-up by a valuable map of the City of Limerick drawn in 1827, which serves as an introduction to the second portion of this volume, which begins with the Civil and Ecclesiastical history of the City of Limerick. This is followed by a fascinating and extremely important 200-page account of the Topography and Antiquities of the City and its immediate environs, which details all of the major buildings and sites of interest to be found in the city. Volume 2 is concluded with seven appendices, which include the complete texts of King John's Charter of the City, the Treaty of Limerick as well as lists of all the mayors, burgesses and Members of Parliament for both county and City. As to the co-authors much more is known about the lay writer. John James McGregor (1775-1834) was a Methodist, historian, journalist for the Munster Reporter and a topographer of note who by the time he came to co-write The History of Limerick had several notable works already in publication. It can be no coincidence that at the time of publication McGregor was Literary Editor for the Kildare Place Education Society and chapters on the improvement of Limerick Society and education may have been undertaken at his bidding. However, it has been posited that McGregor was merely responsible for putting the finishing gloss and polish to The History of Limerick, while much of the local research for the history was undertaken by the Rev. Patrick Fitzgerald, then Vicar of Cahircorney, who had contributed to William Shaw Mason's A Statistical Account, or, Parochial Survey of Ireland: Drawn Up from the Communications of the Clergy, published in 1816. The two-volume History of Limerick is regarded as one of the most detailed and thorough accounts of the County of Limerick and still widely used and cited by writers and researchers on the county and for these reasons this republication of this classic is not to be missed.

The Diocese of Limerick, Ancient and Medieval, 1906