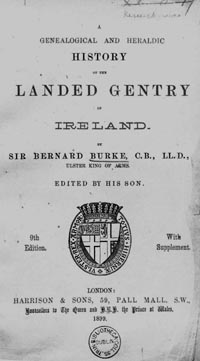 This was the first specifically Irish edition of Burke’s Landed Gentry, and is considerably more detailed on Irish families than what had appeared in previous years in the general British series. It contains detailed genealogies of all the ‘landed gentry’ in Ireland. This group represents the Irish landowners, and those aspiring to this status from among the merchant and professional community. But the value of this source is not just for this narrow group, as the genealogies are extensive, covering all collateral lines, junior branches and in-laws, many of whom would have been of more modest means. The genealogies recorded were overwhelming those developed by the Ulster King of Arms (the Chief Herald in nineteenth century Ireland) and are quite valuable and largely reliable. As a source it is important for all those studying Irish genealogy, especially those whose ancestors were part of this social class.