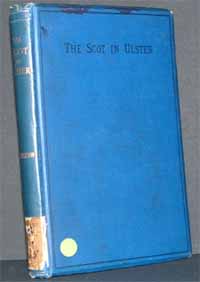 Sometimes given the sub title of sketches of the history of the Scottish settlers in Ulster this book was originally published as a series of articles in the Scotsman newspaper in the spring of 1888, which were written by the Edinburgh based journalist John Harrison. Written at a time when Home Rule was becoming increasingly popular this publication attempts to justify the right of the people of Ulster to protest against any separation from the Union with Great Britain. Harrison traces the history of the Scot in Ulster from the beginning right through the Plantation of Ulster, the Rebellion of 1641, the 1798 Rebellion and beyond the 1801 Act of Union. He emphasises the point that the Scot in Ulster was fundamentally different from the native Irish, that they were in fact two separate races even in 1888. But he hoped that the chasm between the two could be bridged but that would only occur "if they both continue to live in the full communion of that great empire". This original version also includes the catalogue of the publishers, William Blackwood & sons.