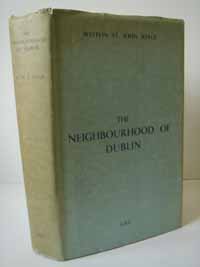 Originally published by Gill & Son., in Dublin in 1912, this republication of the fourth impression of The Neighbourhood of Dublin: its Topography, Antiquities & Historical Associations, published in 1939 was written by Weston St. John Joyce. Weston St. John Joyce (1858-1939), a civil servant by occupation, was also a regular contributor to The Evening Telegraph and later the Weekly Irish Times, to which he contributed numerous illustrated topographical articles over a period of nearly three decades. These articles were collected and published in under the title Rambles Near Dublin. However, realising that his collection of anecdotes, photographies and topographical notes far exceeded anything that could possibly be published by a newspapers, these were collected and published under the title of the The Neighbourhood of Dublin in 1912, which was revised and enlarged in 1921. Joyce was a keen walker and cyclist and sometime permitted himself to take a tram or car to some of his more remoter destinations, especially in this later edition of his work in which he sometimes digresses into the wilds of Wicklow and Kildare. However, his main aim, as he stated in his Preface to this edition was to observe and obtain the history and all matters of interest from a number of one-day excursions that could be completed by any person 'of average activity'. Joyce concluded this edition with notes to his tourists on the type of equipment they should expect to take with them, which included boots, gloves, waterproofs, maps, a camera and magnifying glass for any fauna that might be encountered. Joyce's excursions are published in just over 500 pages in a chatty and humorous and very readable style in which he often delights in presenting legend as historical fact and vice versa. The Neighbourhood of Dublin is illustrated with some 120 photographs taken by Joyce between 1909 and 1912 as well as sketches, route maps and diagrams. Many of the places he visited and the sites he photographed around Dublin have changed beyond recognition a fact that makes this account of the county he clearly loved the more interesting and valuable. Joyce's one-day excursions around county Dublin and into Wicklow and Kildare amount to more than forty-five trips. Beginning in the immediate vicinity of the City of Dublin with a trip to Ringsend, the Great South Wall and the Pigeon House and concluding with a trip to Lambay Island. Although it could be said that Joyce had a witty even a journalistic sense of presenting it should not be forgotten that he was a learned historian and at the time of the publication of this volume was a Fellow of the Royal Society of Antiquarians of Ireland and author of several noted historical works. Perhaps this is one of the several reasons that The Neighbourhood of Dublin is still a much read travelogue and much used reference source for local historians. Republished here in fully-searchable electronic format, The Neighbourhood of Dublin, is still one of the best and certainly one of the most readable topographical studies of County Dublin.