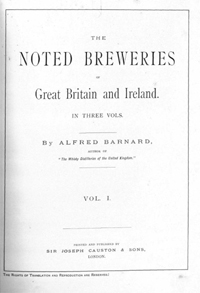 In 1885 Alfred Barnard undertook to visit the whiskey distilleries of Scotland, Ireland, England and Wales. His publication The Whiskey Distilleries of the United Kingdom, published in 1887, has become a world famous guide for the whiskey industry in the United Kingdom and Ireland. Following on from that success Barnard undertook a similar project with the noted breweries. Published over three years and four volumes The Noted Breweries of Great Britain and Ireland is a magnificent insight into the brewing industry at the end of the nineteenth century. The primary aims of the volumes were to make the reader aware of the scale and nature of the brewing industry as well as providing some biographical details on the more eminent brewing families, including the world famous Guinness brewery and many other breweries in Dublin and Cork. Over 110 breweries are covered over nearly 2,200 pages. Many of the descriptions of the breweries are accompanied by detailed sketches or photographs of the premises. If you like beer or even just have an interest in the brewing tradition then you will love this publication.

The Sixteenth Report of the Deputy Keeper of the Public Records of Ireland, 1884