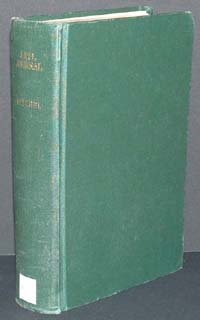 The first edition of John Mitchel's Jail Journal was published in the New York Citizen, the journal established by Mitchel on his arrival in America, between 14th January and 19th August 1854. A subsequent edition of the Jail Journal in which Mitchel detailed his experiences in the United States between 1853 and 1866 was published and the current CDRom version of the Jail Journal comprises both editions. These editions are those published in Dublin in 1913 and 1914 respectively and contain a preface written by Arthur Griffith. John Mitchel (1815-75) was born in Dungiven, Derry, the son of a Presbyterian minister and was educated at Dr. Henderson's Classical School, Newry, before graduating from Trinity College, Dublin, aged nineteen, whence he embarked on his lifelong journalistic career. Mitchel became committed to the political cause of Irish Nationalism and the Young Ireland Movement after the death of his friend, Thomas Davis, in 1845. However, he quickly became frustrated with the pacific nature of Irish nationalism and embarked on radicalising public opinion. This led to a break with the Nation and the establishment of his own forum, the United Irishman, which issued its first number from Dublin on 12th February 1848. Through the United Irishman, Mitchel advocated his policy of 'spontaneous revolution' and it was for this advocacy that he was arrested and tried between 25th and 26th May 1848 under the newly-instituted Treason Felony Act. Sentenced to fourteen years penal servitude, after a convoluted journey he arrived in Tasmania in April 1850, where he resided with his fellow nationalist and brother-in-law, John Martin. The first edition of the Jail Journal begins with Mitchel's incarceration in Newgate Goal and terminates with his escape from Tasmania and arrival in New York in April 1853. Mitchel's style of prose, honed through decades of editorial experience, is highlighted by an acerbic wit. Mitchel never fails to give his opinions on events and individuals that he was associated with. This uncompromising 'honesty', sometimes clouded by the failures of the past makes for uncomfortable reading at times, but never fails to inform. The some total of the Jail Journal has been described, for example by the Oxford Dictionary of Biography, as one of the 'classics of Irish revolutionary writing' and by others as the manual of Irish nationalist philosophy. The current publication of the Jail Journal is fully searchable, making it an ideal research tool allowing the reader to easily and quickly search for Mitchel's views on any of the various individuals that came within his orbit. The Jail Journal contains more than five-hundred pages of text, appendices and some thirty-seven pen and ink sketches or various members of the Young Ireland Movement.