Robert Simpson, The Annals of Derry, 1847 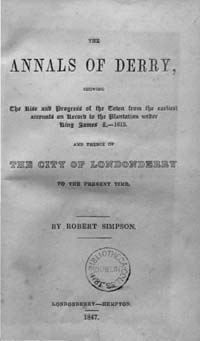 Simpson's Annals of Derry, published in 1847 remains one of the most useful titles available for researchers interested in the history and genealogy of the Maiden City. The book takes the form of a chronological detailing of the principal political and social events within the city, commencing with a consideration of the development of the city from the earliest times, principally garnered from early Irish annals. From this, readers are quickly propelled into an account of the various attempts that were made to plant the region, during the reigns of Elizabeth I and James I. Conveniently, Simpson has presented abstracts from important documents from Derry's historical past, including from the various charters granted to the city, commencing with the charter granted to Henry Dowcra, in 1604, and the 1613 charter, which followed the defeat of the O'Doherty rebellion, in 1608. In spite of the plantation of the region, the city's growth was slow, as is shown by details from Nicholas Pynnar's 1618/1619 survey of the city, which Simpson presents in abstract. According to Pynnar, there were no more than 102 families inhabiting just 92 houses in the city at that time. The events of the two subsequent seventeenth century military campaigns are also detailed, with the besieging of the city by Jacobite forces in 1689 receiving extensive treatment. Various interesting account from the siege are recounted, including an account of the quantity of shells projected into the city and the impact of the food shortages on the diet of the inhabitants. The lifting of the siege, including the breaking of the boom across the Foyle is also celebrated - 'the hour which threatens extermination, may be the harbinger of the most exquisite joy'. The work also contains two detailed maps, both of which portray the city at this crucial time in its history. While the annals are understandably focussed on the most important inhabitant of the city, there is considerable detail to interest both the historian and the genealogist. A 1622 muster roll, of the 'well armed men' details the manpower and weaponry that was available for the city's defence. Also listed are the names of all of the governors of the city, from 1566, the MPs returned for the borough, following the incorporation of the city, in 1613, and a list of all serving mayors and sheriffs, also from 1613. The social and economic development of the city can also be examined, as Simpson has provided extensive information on the rise of food markets, the provision of social services, the development of trade and industry and the growth of the general population and of principal religious communities within the town. This digital edition of Robert Simpson,'s Annals of Derry is an essential source for anyone interested in the history of Derry, and can save the researcher vast amounts of time and frustration. Fully-searchable, users can quickly and conveniently locate personal names, historical events, street names and specific areas of interest.