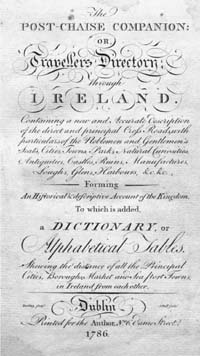 The Post-Chaise Companion of Ireland was published by W. Wilson in 1786. Although a number of companions of this kind were published for Irish use before and after Wilson's edition, this represents one of the most complete guides of its type and all of which were to be relegated to history less than fifty years later with the advent of the railway. Prior to mechanisation, the post-chaise was the most familiar and widely used means of road transport. This commonly took the form of a closed-body travelling carriage, which together with a pair or four horses and postilion driver was hired from stage to stage. Reference is made in the Companion to the more familiar Taylor & Skinner's Maps of the Roads of Ireland, from which the distances to all destinations in this edition are taken. Excepting Taylor & Skinner's maps, the Post-Chaise Companion is in every other aspect a superior publication. The Companion's primary aim is to provide the traveller with distances between the various market towns of Ireland. For those desirous of undertaking any sought of journey, the distance to be travelled was crucial, as the cost of hiring a post-chaise was based primarily on distance. Wilson states that the average price for the hire of carriage and four horses conducting three passengers was two shillings three pence per mile in 1786. Bearing in mid that that an Irish labourer's wage was approximately ten shillings a week, the post-chaise was an expensive mode of transport. Containing more than five hundred pages, the Post-Chase Companion has far more to offer than merely as a directory of distances. A decade prior to the 1798 Rising the Companion details and geographically places all of the gentlemen's seats passed on the routes covered. The Companion is also interested in the all aspects of manufacture that were present along the routes covered. Predominantly describing woollen and linen mills, the Companion is not ignorant of the rural landscape through which the post-chaise roads meander and often remarks on the principal crops and state of the peasantry. It also adequately describes some of the principal sites of antiquity, such as round towers and castles and in this respect anticipates the burgeoning demand for travel companions later in the century. Post-dating Taylor & Skinner's Maps of the Roads of Ireland and pre-dating many less-adequate Irish travel companions and directories, the Post-Chaise Companion has much to recommend it. The current digital publication is fully searchable and is a good addition to any historical library.