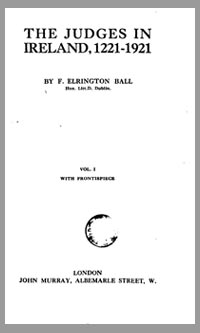 Francis Elrington Ball's The Judges in Ireland was first published in two volumes in 1926 and this present publication is replicated from the first edition. The Judges in Ireland details the first known appointments by an English monarch to a judicial office in Ireland until the last appointment by the English Government to a judicial office in Ireland in 1921. The volumes are arranged by regnal year, the first beginning with the reign of Henry III and ending with the reign of James II. In many respects the entire history of the judicial system in Ireland is remarkable. Despite covering a period of 700 years, most of which were interloped with periods of turmoil, the history of the judges in Ireland is marked by continuity and, baring a few instances, judicial seats were rarely left vacant. The first volume of the Judges in Ireland provides a fascinating history of the development of the bench in Ireland under the chapter entitled 'Precursors', when Henry III was at war in Ireland with the Norman Barons. This is followed by the reigns of Edward I and Edward II, during which periods the three courts of common law in Ireland, the King's Bench, the Court of Common Pleas and the Exchequer were fully established. This is immediately followed by the first list of appointments to the Judicial Bench in Ireland, spanning the periods 1221 to 1377, and beginning with Bishop Ralph de Neville. Each regnal section of the two volume publication is preceded by a lengthy, but fascinating history of the political milieu in Ireland. This amply sets the political context within which the Irish Judicial Bench was operating and conveniently also provides some useful glimpses into the national economy, especially regarding the development of the country's foreign trade. The second volume of Judges in Ireland begins with the reign of William and Mary and ends during the reign of George V. By necessity, the prelude and aftermath of the Act of Union and the development of Whig and Tory politics in Ireland dominate this volume, and thereafter each judicial appointment is accompanied by the judge's political affiliation. Each regnal period is accompanied by a complete succession list to the Irish Judicial Bench, which takes the form of a 'catalogue'. Of more interest and importance is the biographical catalogue of all important appointments and personages to the Bench, which in most instances is much more comprehensive that that found in the published King's Inns Admission Lists, 1607-1867 (Irish Manuscripts Commission, 1982). In addition, as with all CD-ROM publications, The Judges in Ireland is fully and easily searchable. In all, this edition of Ball's The Judges in Ireland encompasses nearly 800 pages of fascinating Irish judicial history and biographical material and should grace the library of any person remotely interested in the evolution of the Judicial Bench in Ireland.