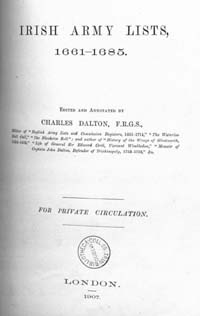 This publication of the Irish Army Lists of the Charles II's Irish Army from 1661-1685 was edited and annotated by Charles Dalton. This edition is taken from number eight of only twenty copies privately printed in 1907, and is inscribed by the author. Much of the information contained in the Irish Army Lists was taken from the Calendars and Reports of the Marquis of Ormond MSS, which were systematically being published by the Historical Manuscripts Commission, but it also draws a plethora of information from the Irish State Papers, as well as the King's Letter and Entry Books. As such is a much more complete publication than that that released by the Manuscripts Commission. The Irish Army Lists predominantly consist of the names of commissioned officers who served in Irish regiments for various dates between 11 February 1661, the inauguration date for Charles II's 'new modelled army', and Charles' death on 6 February 1685. The publication is prefaced by an interesting overview of the new modelled army, a title that was not received by chance as many of the first officers commissioned into the King's new standing army in Ireland were formerly Cromwellian field officers, who were allowed to re-enlist after the Restoration under the 1690 Act of Free Pardon and Indemnity. The Irish Army Lists provided the names and dates of commissions for the senior ranks of the entire new modelled army (captains, lieutenants, cornets, quartermasters and so on) on a number of occasions, including on its inception and in 1685, the year of Charles II's death, and throughout the existence of the army, Dalton's lists record the names of the majority of newly-commissioned officers. In all instances the published Lists are accompanied by a plethora of annotations made by the author, often identifying the officer's parents, place of origin and last will and testament. For many readers, this information might be the most significant aspect of the entire publication. The inauguration of the new modelled army witnessed a vast contraction of the Irish standing army, which was reduced by almost half to thirty troops of horse and sixty companies of foot. A full list of the names of these troops and companies is contained in the Lists. Apart from the lists themselves this publication offers some interesting curios. Recorded, for example, are the names of officers in Ireland in 1680 receiving the Royal Bounty due to wounds received at Tangier as well as the muster roll of four English companies that had arrived from Tangier in Ireland in 1684. Irish Army Lists provides a full index to the names of officers contained in the lists, but it is also fully and easily searchable. The Irish Army Lists provides a fascinating and detailed account of the new modelled Irish standing army during the reign of Charles II and is a welcome and much needed addition to post-Cromwellian Irish history publications.