Robert Curtis, The History of the Royal Irish Constabulary, 1871 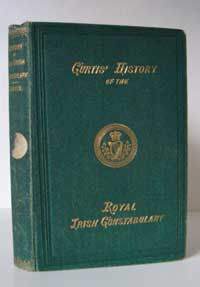 The History of the Royal Irish Constabulary was written by Robert Curtis, a county inspector for the RIC. This second edition of the work was published in London and Dublin in 1871 and was dedicated to the Duke of Abercorn and is republished here in fully-searchable electronic format. The History of the Royal Irish Constabulary begins with a description of the 'policing' of Ireland prior to the introduction of the Peace Preservation Act, which introduced the first organised police force in Ireland in 1814. However, the beginning of the Royal Irish Constabulary was marked by the introduction of what became known as the Peace Preservation Act in 1822. This Act allowed for the establishment of a force in each of the baronies of Ireland each with a chief constable, inspectors general and constables under the jurisdiction of the British Civil Administration at Dublin Castle. This force initially numbered just over 5,300 service men, but by 1841 this number had increased to 8,600. Reorganised in 1836 by Thomas Drummond, the RIC received its first code of regulations the following year. Life as an RIC constable was tough and the pay was poor. Coupled with this the RIC was confronted from its establishment by large-scale civil unrest in Ireland, first during the Tithe Wars and then from the so-called Ribbonmen. Up until the early 1840s, Curtis contents himself with descriptive analysis of the internal organisation and reorganisation of the police. However, from 1842 onward, he turns to specific police actions, which for the basis of the first successes for the Constabulary. The efficiency of the the Royal Irish Constabulary was first demonstrated at the height of Daniel O'Connell's Repeal Campaign and immediately after his death the civil agitation that came in the wake of the Young Ireland Movement leading to the Rising in 1848. Both of these events, culminating in the capture of William Smith O'Brien are portrayed from the standpoint of the actions taken by the police. Curtis considers the rise of Fenianism in Ireland in the person of James Stephens before recounting the events 5th March 1867 the day of the Fenian Rising. In reality the RIC put down the Rising with ruthless efficiency after earlier infiltrating the Fenian Brotherhood with informers. For their loyalty Queen Victoria granted the force the right to use the Royal prefix and use of the insignia of the Most Illustrious Order of St. Patrick. The History of the Royal Irish Constabulary is concluded with the recognition of Individual officers bravery during the 1867 Rising and the award of medals at the Phoenix Park Depot. Although this history of the Royal Irish Constabulary stops far short of a full history of the service, and by the vary nature of the date of its publication does not include the hardest travails that the service would have to face, it is nonetheless a fascinating account of the earliest years of an organised police force in Ireland written, albeit in a rather partisan fashion, by a member of the Constabulary.