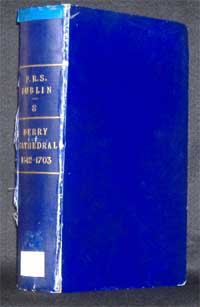 The Parish Register Society of Dublin was established in 1905 for the purpose of transcribing and publishing early Anglican parish registers, and between 1906 and 1915 the Society published twelve volumes of parish registers. Most of the published registers were from parishes in the vicinity of Dublin, and Richard Hayes's transcription of the early registers of Derry Cathedral were the only registers from Ulster to appear in print. After 1915 the Society merged with the Association for the Preservation of the Memorials of the Dead, and transcribed registers appeared in that Society's journal until 1934. In England parish registration commenced during the reign of Henry VIII, under a 1538 edict of Thomas Cromwell, the king's chief governor. The first attempt to establish a system of national registration in Ireland had to wait until the following century, when the registration of births, marriages and deaths was ordered in 1616, during the reign of James I. Registration was resisted by parish clergy, however, and the initiative was speedily abandoned. Two decades later, in 1634, the Church of Ireland adopted new canons, one of which instructed that parishes were to provide 'one parchment book at the charge of the parish, wherein shall be written the day & year of every christening and burial'. In spite of this, parish registration outside of Dublin city appears to have been haphazard during Charles I's monarchy, and, thus, the registers of Derry cathedral, which formally commence in May 1642 are the second oldest surviving registers, after the registers for Blaris parish, County Antrim (1637). Although this is the earliest surviving register for Derry Cathedral, it was not the first register, as it is noted that the records commences 'from the name of John Cole in the last register booke [sic] who was buried the xith [12th] of May Anno 1642' (p. 3). That earlier register was lost at the time Hayes was working with the records. Running to almost 450 pages and recording over 12,000 baptisms, marriages and burials for the entire parish of Templemore (including Derry city) between 1642 and 1703, these registers are will prove an extremely useful source for any researchers interested in the development of Derry city, the development of parish registration or regional demographic history during the latter half of the seventeenth century. Additionally, they are packed with useful vignettes, which can open up new views on early modern community life in Irish urban settings. In 1653, for example, Barebones Parliament outlined new rules governing registration, which instructed that parishes, after 1 December of that year, employ a civil registrar to record births, marriages and deaths, and it is noted that Derry implemented the new system immediately, appointing Theophilus Davis, the schoolmaster, as registrar on that date (pp 12, 13). Davis received custody of the old registers (p. 13), so the first register may have been lost at that time. The impact of the 1641 Rebellion on ecclesiastical organization in the city can also be seen in the note that the Bishop, Bramhall, was forced to flee Derry, and did not return until March 1660, when he was formally reinstalled (p. 70). Robert Lundy [Lunedy], the governor of Derry during the siege, also appears in the registers, with the baptism of his daughter, Aromintho (p. 295), in May 1686. The volume also includes indexes of persons, parishes and places, although since this digital edition is fully searchable, researchers will be quickly able to search for names and places that interest them. This title is strongly recommended as a substantial resource for those researching the development of Derry city during the seventeenth century.